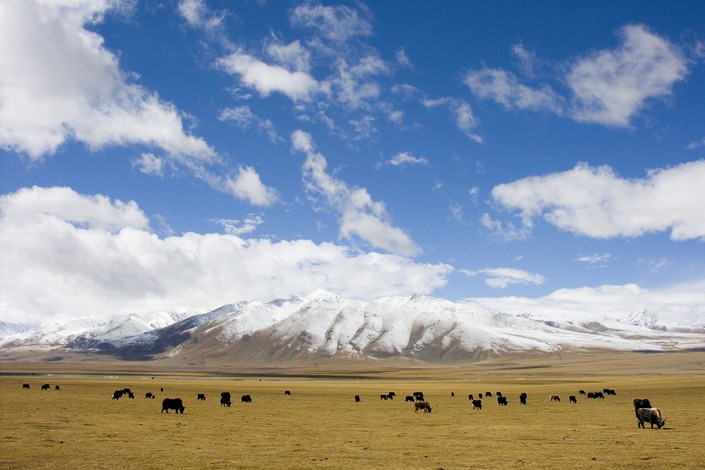 Yaks graze on the Qiangtang grassland in the Tibet autonomous region. Photo: VCG

Authorities in China said they have uncovered thousands of violations of rules meant to protect the country’s grassland, and that many of the cases may result in criminal charges.

China’s National Forestry and Grassland Administration reported some 82,000 violations from 2013 to 2017, of which 2,400 are being handled by judicial authorities for potential charges.

Rampant development and overgrazing were two of the biggest contributors to the receding of China’s grassland, said Liu Jiawen, a supervisor at the administration, at a media briefing in Beijing in Wednesday. However, he stopped short of offering details in specific cases.

The dire straits of pastures in China was underscored by media reports last year that Maqu county in the northwestern province of Gansu — a Tibetan-populated area known for its wet grassland — saw 90% of its 2 million acres of grassland begin to recede.

Half of Maqu country’s Hequ horse range — an area of 10,000 acres — has been lost to desertification over the past two decades, according to the Economic Information Daily, citing locals.

Many parts of Gansu, including the provincial capital of Lanzhou, were hit by the most severe sandstorm in eight years in April, with visibility down to 700 meters (2,300 feet).

Two-fifths of China is covered in grassland, giving it 12% of the world’s total — the most of any other country. Many of the inhabitants of these areas are impoverished and rely heavily on livestock breeding for their living.

Alarmed by the growing problems linked to pasture encroachment, the government spent 40 billion yuan ($6.0 billion) on grassland conservation from 2011 to 2016, most of which was used to compensate herdsmen for turning their ranges into protected areas, according to the administration.

Herdsmen can actually benefit from conservation if done properly, Liu said. If China can match the level of conservation efforts seen in developed countries like Australia, its cattle industry could grow by up twentyfold, Liu said.