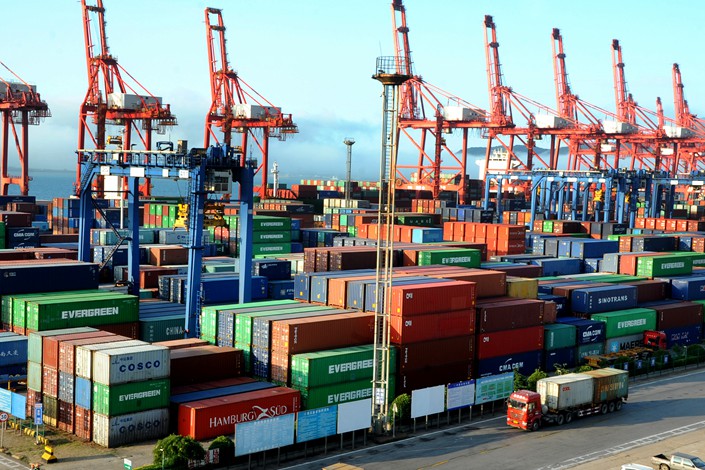 Foreign trade containers are stacked at the Port of Lianyungang in Jiangsu province on July 13. Photo: VCG

China’s Ministry of Commerce has fired back against accusations from a top White House economic adviser that the Chinese leadership was not cooperating in trade talks.

At a news conference, Ministry of Commerce Spokesman Gao Feng rebutted claims (link in Chinese) that China is responsible for the lack of progress in trade talks, arguing that Beijing has tried to find solutions in the four rounds of consultations that the two sides have held since February. When the countries agreed to avoid a trade war on May 19, Washington unilaterally backtracked on it 10 days later, Gao said.

In a further rebuke, Gao said the U.S. “wields the big stick of tariffs, which it uses to implement its global trade hegemony while constantly professing its grievances and innocence while laying all the responsibility on the other side.”

Gao was responding to complaints by White House National Economic Council Director Larry Kudlow, who accused China’s top leadership of having no intention of following through on bilateral discussions on Wednesday. “I think the president is so dissatisfied with China on these so-called talks that he is keeping the pressure on, and I support that,” Kudlow said in an interview with satellite business-news channel CNBC.

China’s Foreign Ministry also hit back on Thursday at Kudlow’s comments, with spokesperson Hua Chunying saying at a news conference that a “U.S. official still dared to call white ‘black’ and tried to shift the blame onto China. That honestly entails some extraordinary imagination.”

China’s currency continued to weaken this week and hit its lowest level in a year on Thursday as escalating trade tensions between the countries eroded market sentiment. The central bank set the yuan’s daily reference rate against the dollar Thursday at 6.7066, 0.23% weaker than the previous fix. It was the first time since August that the rate had fallen below the psychologically important level of 6.70 per dollar.

The U.S. has complained about the size of its trade deficit with China, which stood at $375.2 billion last year, though some experts question the validity of this figure. In an opinion piece this week, former finance official Yu Yongding pointed out that “people often overlook the U.S.’ services trade surplus with China” and that the U.S. could reduce the deficit if it relaxed current restrictions on the export of high-end products that China wants to buy.