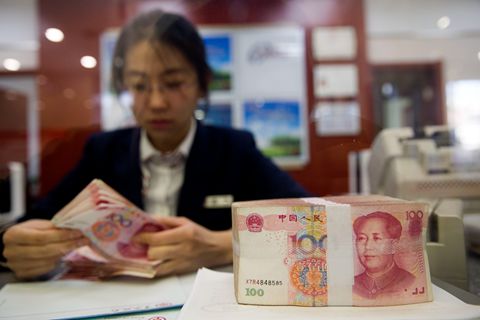 By the end of June, the outstanding amount of bank WMPs totaled 21 trillion yuan. Photo: VCG

The long-awaited draft of new regulations from the China Banking and Insurance Regulatory Commission (CBIRC) would supplement guidelines issued by the central bank and other financial regulatory bodies in April. The guidelines set an overarching regulatory framework for the country’s asset management products offered by financial institutions including banks, securities firms and trusts.

WMPs are part of China’s $15 trillion of asset management market, which has become a target of regulators’ crackdown on risky shadow lending and excessive financial leverage. The proposed new regulations would go fully into effect Jan. 1, 2021, following a comment period and a transition period.

The draft rules would set up standardized supervision of banks’ wealth management business, improve protections for investors and bar the implicit guarantees against losses that banks often offered to attract investors, the CBIRC said in a statement on its website (link in Chinese).

The new rules are intended to “remove uncertainties and stabilize market expectations,” the CBIRC said.

The issuance of the draft rules was delayed because of the recent slump in Chinese stocks and the yuan, Caixin has learned. They were expected to be introduced in early July after review for comment by a select group of market participants.

Chinese banks’ wealth management business took off after 2002, and assets under bank management surged to nearly 30 trillion yuan by the end of 2017, one of the largest segments of China’s thriving asset management market. But the market has been plagued by lax supervision, excessive leverage and risks from unregulated credit activities outside of the formal lending system.

As regulators have pursued their campaign to rein in financial leverage and risks, the WMP market shrank to 21 trillion yuan by the end of June, CBIRC data show.

An individual whose annual income has been at least 400,000 yuan over the past three years can also purchase these products, according to the draft. The income definition for qualified investors for privately offered WMPs would be double the existing standard for the higher-return but riskier products. Each privately offered WMP could be sold to no more than 200 buyers, all of whom must also have at least two years of investment experience, according to the draft regulations.

Meanwhile, the minimum purchase of each WMP by both average and high-net-worth investors, which the draft defines as a “publicly offered WMP,” would be lowered to 10,000 yuan from the current 50,000 yuan, in line with the central bank’s asset management rules.

Banks should manage WMPs based on the net asset value of their products reflecting the performance of underlying assets. They will be prohibited from offering an implicit guarantee on the WMPs they sell.

The rules would also bar banks from investing more than 4% of their total assets, or 35% of their total WMPs, in a single nonstandard debt project, which usually refers to shadow lending.

By the end of June, about 15% of the 21 trillion yuan of WMP funds was invested in nonstandard debt assets while 70% was invested in standardized assets such as bonds, deposits and money market instruments, according to the CBIRC.

The new rules also would require banks to cooperate only with licensed financial institutions in WMP investments and ban them from investing in each other’s WMPs.

The public has until August 19 to file comments on the draft regulations with the government. A transition period for the new regulations will last until Dec. 31, 2020, according to the statement.

Banks will also be permitted to “take appropriate steps” to deal with off-balance-sheet assets in which they have invested by using funds from the sale of WMPs after the grace period if they have trouble bringing assets back onto the books, the document said.