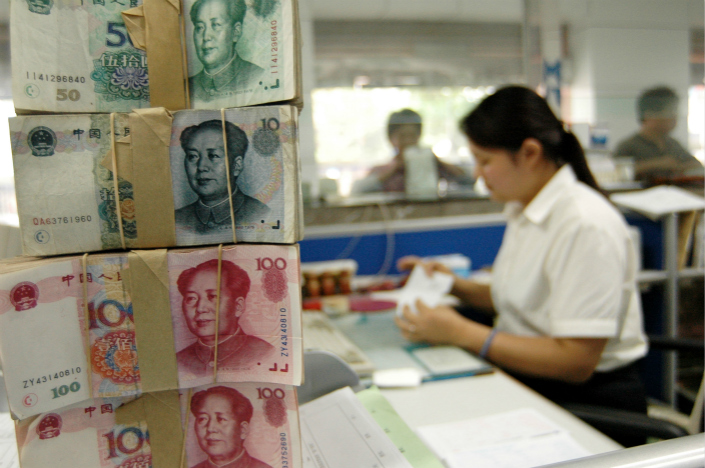 * Outstanding WMPs invested in nonstandard investments fell 5.4% from the end of 2017 to the end of March

* However, the outstanding amount of structured deposits issued by commercial banks surged 50.8% year-on-year in April

The drafted WMP rules, a part of the national develeraging campaign to curb financial risks, were supposed to be introduced in early July after being reviewed for comment by a select group of market participants. However, the regulators have since decided to wait because of the recent slump in Chinese stocks and in the yuan, banking sources said.

China’s benchmark stock index has posted losses for seven straight weeks on concerns about a slowing economy and a trade war with the U.S. A sell-off in the yuan is adding to the pressure on regulators to ease up on adding stricter rules that might further upset the markets, people close to the regulators said.

The drafted WMP rules, designed as a key supplement to the asset management rules issued in April, are likely to impose more stringent requirements on the investment scope of banks’ wealth management products, limiting their exposure to nonstandard investments, which have been under growing leverage and liquidity risks.

Chinese banks held 29.54 trillion yuan in outstanding WMPs at the end of 2017, making it the biggest segment of China’s asset management industry.

Once the rules are implemented, banks will not be able to offer an implicit guarantee on the WMPs they sell and will have to offer yields based on the net asset value of their products that actually reflects the performance of the underlying assets.

The rules would also bar banks from investing more than 4% of their total assets, or 35% of their total WMPs, in a single nonstandard investment project to diversify risks. They will also prohibit banks from cross-holding of WMPs or purchasing WMPs through funds that have been funded by WMPs.

The regulator is also considering taking over products that fail to reveal their actual underlying assets, as required by the new rules, Caixin has learned.

Although the rules have faced strong resistance from the industry as WMPs remain one of the most profitable businesses in finance, regulators appear determined not to compromise. Outstanding WMPs that invest in nonstandard investments fell 5.4% to 21 trillion yuan from the end of 2017 to the end of March, according to documents seen by Caixin, as companies reduce their off-balance sheet WMPs.

The industry has resigned itself to cutting back on the amount of WMPs while increasing the speed of asset disposal, said a banker at China Merchants Bank, which has the second largest amount of WMPs among Chinese lenders. “The rational choice at this stage is to clean up the off-balance sheet business as soon as possible.”

Qu Qing, a bond analyst with Hua Chuang Securities Co. Ltd., echoed the view that a delay in WMP regulations doesn’t herald a change in the government’s drive toward stricter regulations.

“If the WMP rules are delayed, it will only be a short-term change due to the recent market downturn,” Qu said in a Sunday report. “Once the market calms down, it is very likely that regulators will put the rules back on the agenda.”

Along with details about WMP regulations, the rules will create a regulatory distinction between bank WMPs and structured deposits, Caixin has also learned. The latter is an alternative product to bank WMPs that has recently grown in popularity.

Faced with curbs on their WMP business, many banks, especially smaller ones, have turned to structured deposits to attract funds. At the end of April, the outstanding amount of structured deposits issued by commercial lenders was 9.15 trillion yuan, a surge of 50.8% from a year earlier, according to central bank data. In the first quarter, the growth rate was 46.7%.

Banks are pitching structured deposits as a safe product with good returns. These deposits are supposed to be linked to the performance of some kind of investment or derivative, such as a stock or commodities index, by some are not actually linked, while others promise unrealistic returns, Caixin reported earlier.

Under pressure to bring in customer funds, some banks have been running afoul of asset management rules by giving implicit guarantees on the returns of structured deposits, said Yulia Wan, banking analyst with Moody’s Investors Service.

In addition, regulators will create criteria for banks to set up wholly owned WMP units, Caixin has learned. The goal is to get banks to spin off their WMP arms so as to separate their WMP business from their loan and credit businesses. That could help prevent credit from flowing into the shadow banking industry, where risks are far larger and more opaque.

As of June, 10 of 27 banks licensed to sell mutual funds and trust products have announced they would establish wealth management subsidiaries.