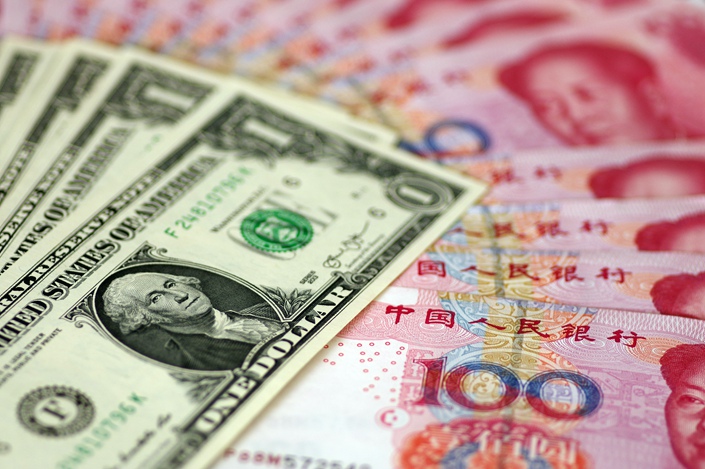 The People’s Bank of China appears unfazed by the yuan’s latest depreciation and is content, for now, to allow further declines, Photo: VCG

(Beijing) — The Chinese currency extended its losing streak against the dollar on Wednesday, hitting a fresh six-month low as concerns over a looming Sino-U.S. trade war and expectations of further monetary easing by China’s central bank weighed on investor sentiment.

The yuan, also known as the renminbi (RMB), was trading at 6.5950 against the greenback in the onshore spot market at the official market close at 4:30 p.m. Beijing time, 0.6% weaker than Tuesday’s official closing price of 6.5560. It marked the fifth straight trading session of declines and took the yuan to its lowest close since 6.6075 on Dec. 19.

The yuan had been depreciating modestly since early April as trade tensions with the U.S. mounted. But the pace of its decline started to accelerate about two weeks ago after the release of disappointing data that pointed to a steeper-than-expected slowdown in growth in the world’s second-largest economy. The currency has weakened around 3% against the dollar since June 14.

The yuan is also being dragged down by the narrowing gap between Chinese and U.S. interest rates, as the People’s Bank of China (PBOC) has refrained from moving in lockstep with the Federal Reserve as U.S. central bank raises the cost of borrowing. Instead, the PBOC has recently taken a series of steps to push more liquidity into the money market, which oils the daily wheels of the financial system.

On Sunday, the central bank announced another cut in banks’ reserve requirement ratio, allowing most banks to reduce the amount of cash they need to set aside as reserves by 50 basis points from July 5, which would free up a total of 700 billion yuan ($106.6 billion) for lending. On Monday, the PBOC said it will reduce re-lending interest rates on credit to small companies and increase the re-lending quota for loans to small and micro companies and the agriculture sector.

Investors are betting that the PBOC may be forced to loosen monetary policy further to bolster growth, analysts said.

“The trade war has affected people’s confidence in the yuan,” Ji Tianhe, a China rates and foreign exchange strategist at BNP Paribas, told Caixin. “What concerns the market more is the central bank’s rather intensive loosening policies. … Investors now hold very strong expectations for policy easing from the PBOC, which is negative for the yuan exchange rate.”

The central bank, which has repeatedly said it wants to see more two-way movement in the Chinese currency to break one-way bets on the yuan’s direction, appears unfazed by the latest depreciation and is content, for now, to allow further declines.

It set the central parity rate of the yuan lower for the sixth consecutive day on Wednesday at 6.5569 to the dollar compared with the previous day’s fixing of 6.5180.

She said the yuan’s movement so far remains within the “tolerance range” of policymakers, and that the currency is likely to stay weak ahead of the expected decision on Friday by U.S. President Donald Trump’s administration to impose restrictions on Chinese investment in the U.S. and implement the first round of tariffs on imports from China on July 6. Other factors –– such as the ongoing seasonal dividend payments that is creating a temporary surge in demand from companies for foreign currency –– will also continue to drag on the yuan, she said.

“The authorities may also see this as an opportunity to familiarize local investors with higher two-way volatility in the currency, to prepare for further opening-up of the bond and equity markets,” Wang added.

The yuan’s depreciation has yet to significantly impact global markets, as it did in August 2015. However, it is hurting companies, such as air carriers, that have high levels of dollar debt, said Nathan Chow, an economist with Singaporean bank DBS. In addition, the value of currencies of other Asian emerging economies that could also be targeted by Trump’s trade protectionist measures, including the South Korean won and the Taiwan dollar, will also trend down as the yuan plunges, he said.

Chow said he thinks Chinese authorities will wade into the market to shore up the yuan if it falls “too much within a short period of time.”

“A range of measures could be used to intervene if needed (such as) adjusting the daily fixing rates and dumping dollars through agent banks,” Chow told Caixin in an email.

But he said the government should avoid the kind of excessive squeezing of yuan liquidity in the offshore market in Hong Kong as it did in 2015 and 2016 to ward off short sellers as “offshore activities have just started to recover this year.”

Cheng Shi, chief economist of ICBC International, said the central bank should be alert to the yuan’s depreciation becoming a self-fulfilling prophecy. The PBOC’s tolerance of the currency’s decline triggered a flood of capital outflows starting in early 2015 that persisted for around two years and forced the government to significantly tighten capital controls to stem the tide.

Given that the Chinese economy could be hit by a double whammy of “internal and external uncertainties,” policymakers should “closely follow changes in expectations of the yuan’s movement and strengthen its management of those expectations,” he said.

“It is crucial to prevent the re-appearance of the demon of depreciation (expectations).”