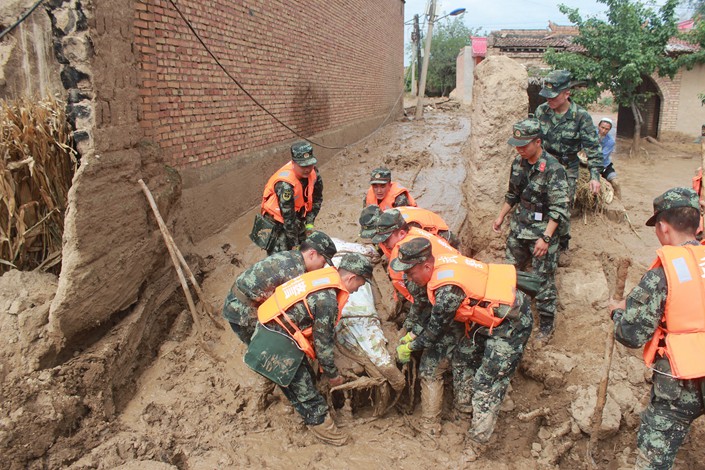 Armed police officers rescue a victim of a flash flood on Thursday in Linxia prefecture in China’s northwestern province of Gansu. Photo: VCG

Twelve people are confirmed dead and another four are missing in the northwestern province of Gansu after a flash flood battered the area on Wednesday night.

In addition to the dead and missing, another 39 were hospitalized in the worst-hit area of Dongxiang county, local authorities said. Dongxiang and two neighboring counties comprise the Muslim-populated Linxia prefecture in central Gansu.

In Dongxiang alone, the flood forced more than 2,400 people to relocate after their houses, fields and roads were submerged in rising water. By Thursday night, economic losses were estimated at 320 million yuan ($47 million) in the county, which has a population of 300,000, the Linxia government said.

The two other counties affected by the torrential three-hour downpour — Guanghe and Hezheng — also reported tens of millions of yuan in damages, the government said.

Up to 166 millimeters (6.5 inches) of precipitation fell in some places in Dongxiang in less than three hours starting from around 9:15 p.m. Wednesday. The downpour caused sudden surges in local waterways and reservoirs, according to the government.

Authorities are still assessing the damage, but Gansu, known for prolonged dry spells most of the year, made national headlines in recent years for several deadly summer floods.

More than 50 people were killed in the city of Dingxi in Gansu in May 2012 in a flood that caused 6.8 billion yuan in direct economic losses. Illicit housing development on dried river beds contributed to the death tolls, according to the state-run Xinhua News Agency.