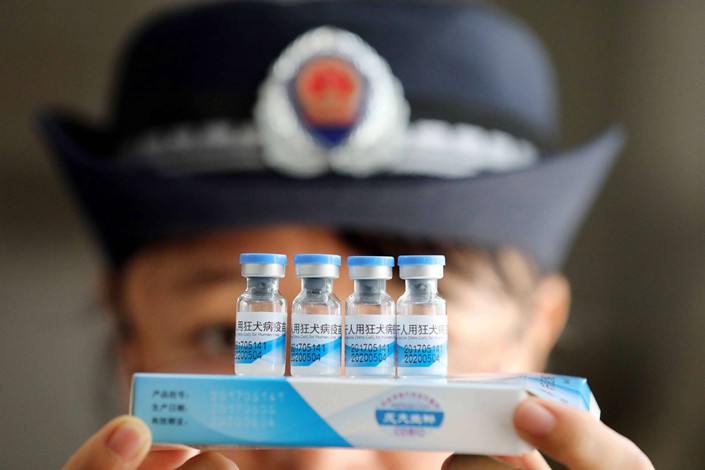 A law enforcement officer examines bottles of rabies vaccine on Monday at a warehouse of a disease control and prevention center in South China’s Guangxi Zhuang autonomous region. Photo: IC

(Beijing) — Several drug-related stocks have tumbled amid an explosive scandal involving the administration of shoddy vaccines to hundreds of thousands of children in China.

Officials said a subsidiary of the company, Changchun Changsheng Life Sciences Ltd., sold 250,000 doses of a substandard-quality vaccine for diphtheria, pertussis and tetanus (DPT) in Shandong province. The unit has also been accused of tampering with production data for its rabies vaccine.

There have not been reports of harm from the vaccines, but President Xi Jinping and Premier Li Keqiang have called for a thorough investigation into the issue. The company has been ordered to stop production, and police in Changchun, where the company is based, announced on Monday that they had arrested the company’s chairwoman, Gao Junfang, along with four other executives.

Several government agencies, including the drug regulator and corruption watchdog in Jilin province, where the company is based, as well as the top securities regulator, have begun probes into its production and financial data, as well as any possible corruption.

More than 50 vaccine and biotech stocks tracked by data provided Wind opened down 1% on average on Tuesday. By comparison, the benchmark Shanghai Composite Index, which has fluctuated during the Sino-U.S. trade war, has picked up since Thursday and closed up by 1.61% on Tuesday.

Stocks of firms that have not been found to have quality issues should rebound soon as market sentiment eases, said Zhang Jinghan, a health care industry analyst at CEBM Group, a subsidiary of Caixin Insight Group.

The industry has been rife with scandals in recent years, but previous cases didn’t impact stocks to such a degree.

In 2016, nine companies were involved in the illegal sale of improperly stored or expired vaccines. Only one is a subsidiary of a publically traded company, Shenzhen-listed Walvax Biotechnology Co. Ltd.

Walvax swiftly suspended trading when the investigation was announced. The suspension lasted seven months, during which time Walvax spun off the problematic unit and spared its own shares.

Regulators later announced that the deaths were unrelated to the vaccines.