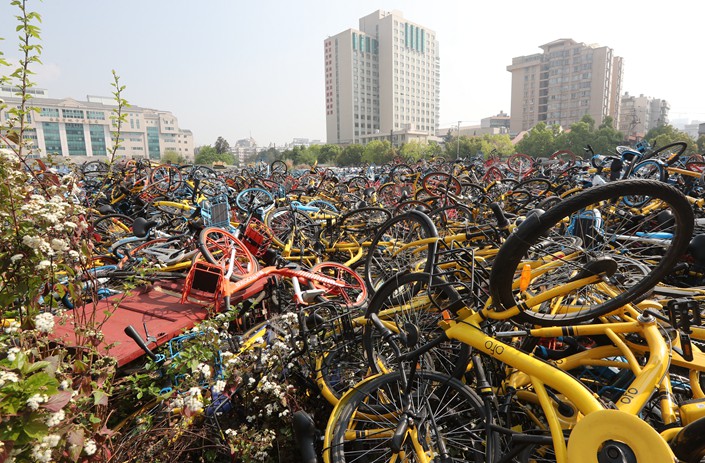 Shared bicycles sit in a heap on March 25 in an empty lot in Kunming, Yunnan province. Photo: IC

Kunming has become the latest Chinese city to limit the number of bicycle-sharing companies operating within its jurisdiction, as the country gradually puts a brake on a supply glut that has cluttered city streets with bikes that eventually end up in the garbage dump.

The capital of southwestern China’s Yunnan province announced Friday new rules stipulating that from August it would no longer accept applications to start bike sharing operations in the city. It also capped the total number of bikes from existing sharing operations at 300,000.

Kunming’s streets are already filled with 350,000 such bicycles from four operators — Mobike, Ofo, Hellobike and Qingju Bike. The four companies have 4 million registered users in a city with a population 6.6 million.

Kunming joined 14 other Chinese cities that have limited the number of shared bikes in their areas. These cities include Beijing, Shanghai, Guangzhou, Nanjing and Hangzhou.

It was only two years ago that brightly colored bicycles owned by startups Beijing Mobike Technology Co. Ltd. and Ofo began their maiden rides in Beijing and Shanghai, tapping global positioning system technology to allow riders to use mobile apps to find and unlock bikes parked anywhere on the street.

The strong positive consumer reception and the promising business model have since drawn in more than 40 rivals, creating fierce competition that has created a glut of bikes that litter the city and often block sidewalks.

Competition rose to a new height earlier this month, when industry leader Mobike — owned by China’s largest online booking service platform Meituan-Dianping — said it would scrap its 299 yuan ($45) deposit, and said it would launch a shared electric scooter service in the near term.

Beijing’s restrictions reduced the number of shared bikes in the city to around 1.9 million as of the end of April, down nearly 20% from the peak in September, figures from the city’s transport authority show.

Mobike has said it expects 10 million shared bikes to be disposed of worldwide by 2020, creating 160,000 tons of garbage.

Cities such as Beijing and Shanghai have mandated that shared bikes be recalled after three years in operation to ensure rider safety.