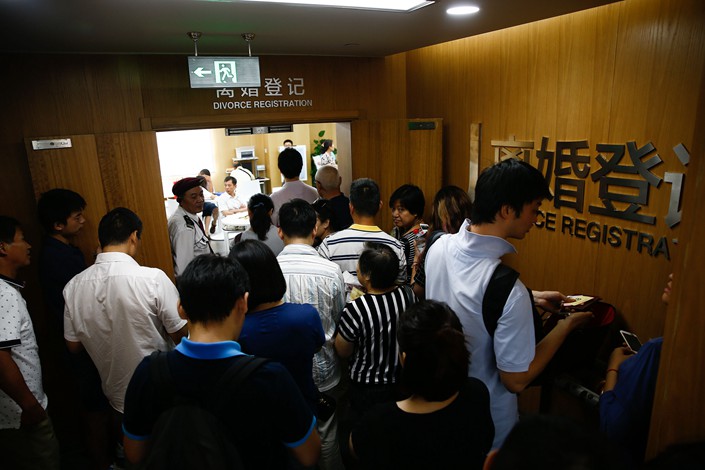 China is set to introduce a “cooling-off” period for divorces to address a spike in the rate of separations.

Under draft recommendations released last week by the Supreme People’s Court, judges would be able to impose a waiting period of up to three months on couples who fail to settle on a divorce out of court.

The Supreme Court argued that couples could use the period to mediate their differences and obtain counseling services.

China’s crude divorce rate — the number of divorces per 1,000 people — more than doubled from 2006 to 2016, reaching 3%, according to the National Bureau of Statistics. About 4.2 million divorces were reported in 2016, up from 1.91 million divorces a decade before.

More than 70% of divorces are filed by wives, according to the Supreme Court-backed China Justice Big Data Service Platform.

This would be China’s first nationwide cooling-off period. Such measures have already been in regions such as Sichuan, Fujian and Guangdong provinces to counter a trend of divorces triggered by differences over trivial matters or that have been filed impulsively, according to Li Mingshun, a law professor at China Women’s University.

In the first such reported case in Sichuan, a couple decided to withdraw a filing for divorce at the end of a mandatory three-month cooling-off period in March 2017.

But some have argued that this makes divorce more difficult, and may infringe upon the country’s Marriage Law.

Freedom to marry and divorce are both guaranteed by the law, but partners must uphold the “dignity of marriage,” Li said.

A cooling-off period is seen as a countermechanism against recklessness and impulsiveness among some irresponsible couples, she said.

Such a mechanism is unnecessary because couples already have to go through lengthy proceedings — sometimes taking up to six months — before they can get a court order for a divorce in China, according to a judge in Shenzhen who asked not to be named.

As an unwritten rule, Chinese courts do not usually grant a divorce in the first hearing unless a plaintiff presents evidence such as domestic violence, extramarital affairs or bigamy, the judge said.

“A cooling-off period might only prolong the bitterness of the couples or be used by courts” to cover up their red tape or misuse of power, he said.