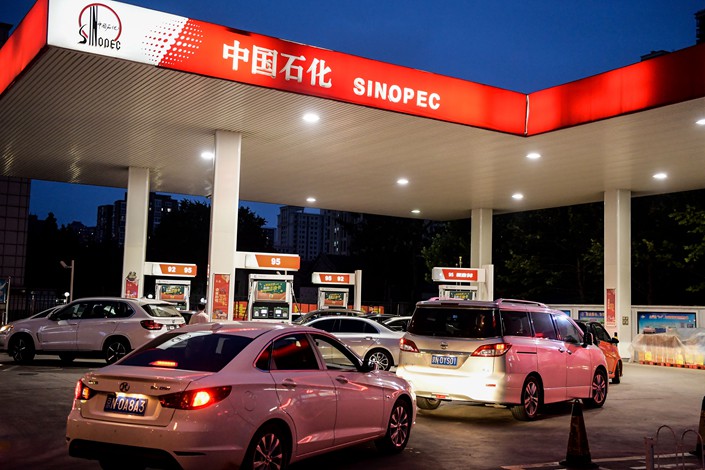 Cars wait to fill up at a Sinopec gas station in Beijing on July 9. Photo: IC

Shares of China Petroleum and Chemical Corp. (Sinopec) rose on Wednesday after the country’s leading state-owned oil producer and refiner said it expects profits for the first half of 2018 to soar by around 50% due to rising crude prices.

Sinopec’s Hong Kong-listed shares rose as much as 3.5% during the day, before closing up 2.1%. Its Shanghai-listed shares were up by a more modest 0.3%.

Sinopec credited the profit jump to the rise in international oil prices, which will give a significant boost to its upstream operations, it said in a statement on Tuesday to the Hong Kong stock exchange. It also cited “structural adjustments” and “optimization” in its mid and downstream sectors as contributing factors.

The company reported a profit of around 27.1 billion yuan ($4 billion) in the first half of last year, and said the amount would rise by “around 50%” in the same period this year.

Sinopec’s oil and gas production and its refinery output showed modest changes in the first half of 2018 from the same period in 2017, according to data in a separate announcement. The biggest changes were in its kerosene production, which rose 9.4% year-on-year to 14.25 million tons. Overseas crude oil production actually fell by 12% to 20.08 million barrels in the first half of 2018 from 22.82 million barrels a year earlier.

In April, Sinopec released plans to make clean-fuel production — including natural gas, biodiesel and ethanol gasoline — account for half of its total energy output by 2022. The company hopes to boost its annual natural gas capacity to 60 billion cubic meters (2.12 trillion cubic feet) by 2023.