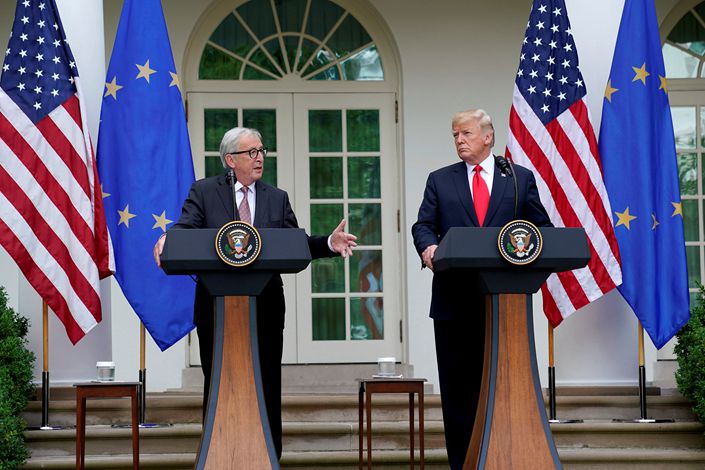 China on Thursday welcomed an agreement between the U.S. and the EU that could reduce tensions between two of the world’s top trading partners, but said no talks have been scheduled to resolve its own similar conflict with Washington.

The U.S. and the EU agreed on Wednesday to negotiate to reduce tariffs and other trade barriers related to all industrial goods other than cars, a sign of easing tensions between the two sides. The U.S. had previously imposed protective tariffs on aluminum and steel imported from the EU, prompting Brussels to take retaliatory measures.

“It is certainly a good thing to not fight a trade war, not only for the U.S. and Europe, but also for the whole world,” Ministry of Commerce Spokesman Gao Feng said at a regular press conference. “We will keep an eye on whether the two sides’ joint statement can get implemented.”

Gao did not directly address a reporter’s question on whether China might be pressured by the new consensus between Washington and Brussels to resolve its own trade frictions with the U.S.

The EU signed the outline of a free trade pact earlier this month with Japan and is expected to propose a similar deal with the U.S. However, progress on developing a free trade zone between China and the EU has been slow even though Beijing is keen to accelerate that process.

Responding to a question on whether developed economies are marginalizing China by seeking to form their own new trade alliances that exclude the world’s second-largest economy, Gao said Beijing supports any regional free trade pacts as long as they comply with rules of the World Trade Organization (WTO) and can facilitate globalization.

“We hope to defend the unity of the WTO and jointly defend and grow the multilateral trade system with all (WTO) members,” he told reporters.

He added that China and the U.S. are not in contact regarding the resumption of negotiations to settle their own trade disputes. That repeated the Chinese government’s stance that a prerequisite for the restart of such talks would be an assurance that the other side will keep its promises – a reference to Washington’s levying of protective tariffs last month after previously promising not to do so.