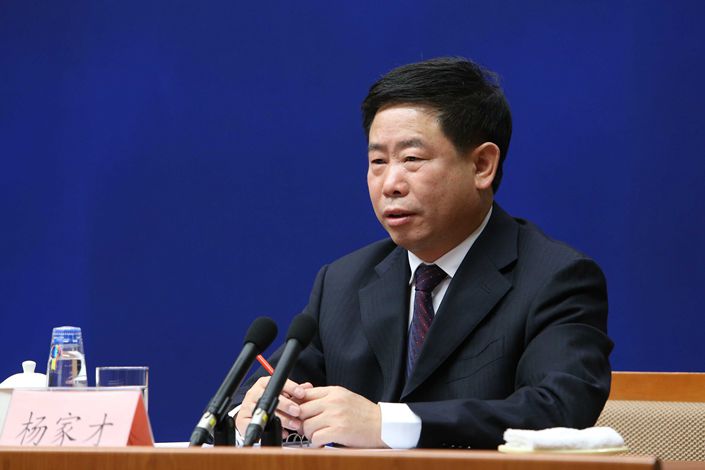 (Beijing) — China has sentenced a former top banking regulator to 16 years in prison for accepting tens of millions of yuan in bribes, state media reported.

Yang Jiacai, 57, a former assistant chairman of the China Banking Regulatory Commission (CBRC), was sentenced to 16 years’ imprisonment by a court in Puyang, in Central China’s Henan province, for taking bribes and amassing enormous assets that can’t be accounted for, according to a posting on a WeChat account linked to the city government.

Yang was confirmed to have taken bribes worth 23 million yuan ($3.39 million) and kept another 31.6 million yuan of unaccounted-for wealth when he served in senior posts at the central bank and the CBRC from 1998 to 2017, the July 20 posting said. He has also been fined 2 million yuan.

Yang has accepted the verdict and will not appeal, the posting added.

Yang, who worked in the Chinese financial regulation system for more than 30 years, was in charge of key CBRC departments such as human resources and the general office before he was placed under investigation in April 2017.

Yang attracted investigators’ attention when they were probing a loan scandal in Wuhan involving wrongdoings of a senior official of the state-owned Bank of Communications, China’s fifth-largest lender.

The first official to fall within the banking regulatory system, Yang informed investigators of the misconduct of nine other CBRC officials and eight employees of financial institutions, sources with knowledge of the matter told Caixin previously.

Some financial institution executives who offered bribes to Yang have been demoted, and some CBRC officials who were close to him have been assigned to other posts outside the regulatory system.