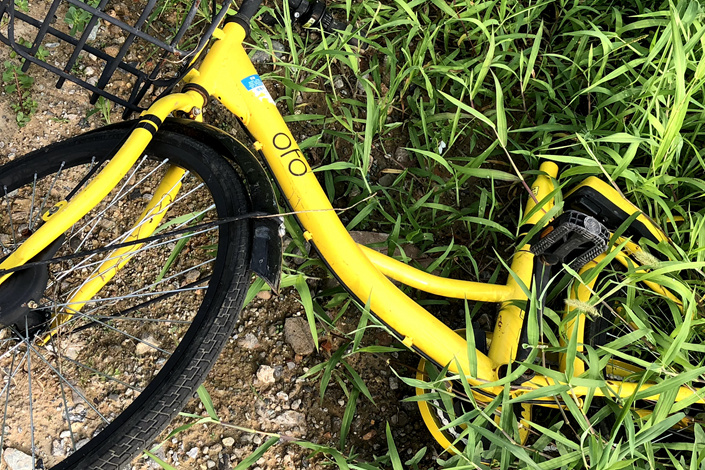 A damaged Ofo bike lies on a roadside in eastern Beijing on Monday. Photo: Wu Gang/Caixin

* Move comes amid speculation that Ofo will sell itself to Didi Chuxing, a claim that both companies deny

(Beijing) — Alibaba Group Holding Ltd. has invested $343 million in bike-sharing venture Ofo as of March, giving the internet giant a roughly 12% stake in the cash-strapped startup.

Alibaba made the investment by acquiring existing and newly issued preferred shares of Ofo, according to Alibaba’s annual report to the U.S. Securities and Exchange Commission. The deal also involved Alibaba’s fintech affiliate, Ant Financial Services Group. The investment gives Ofo a valuation of at least $2.8 billion.

The move comes amid news reports this week that the company has nearly closed a deal to sell itself to Didi Chuxing, the country’s largest ride-hailing platform. Both Ofo and Didi have denied the reports.

Ofo, founded in 2015, and its rivals pioneered the bike-sharing business, which allows users to unlock bikes anywhere they can find them, and then simply lock them again anywhere when finished.

But after raising and spending hundreds of millions of dollars of investment, the industry has come under pressure to find a sustainable business model. Users pay only 1 yuan (15 U.S. cents) for every 30 minutes they spend on an Ofo bike.

Didi has been one of Ofo’s largest investors since July 2017, when it participated in Ofo’s 700 million yuan fundraising round. But the pair’s relationship has since soured as they have battled for influence over the company’s future direction, Caixin reported in December.

Ofo has begun to retreat from its international expansion due to a lack of continuing funding. The company plans to reduce its Asia operations to four overseas markets — Japan, South Korea, Hong Kong and Singapore — a source familiar with the matter told Caixin last month.