By Mo Yelin and Yang Ge 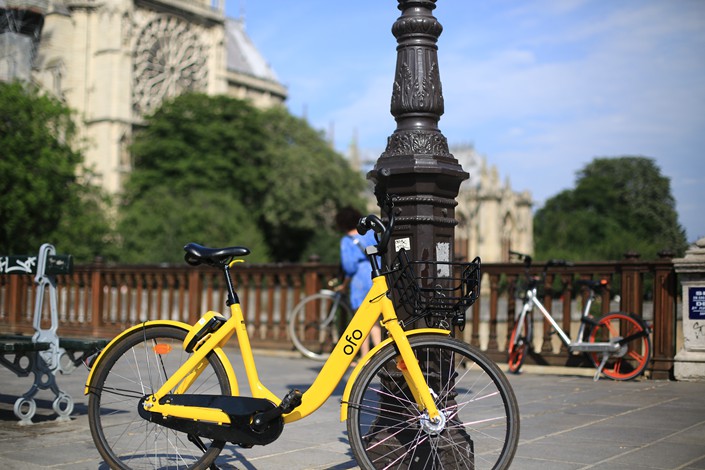 Bicycles from bike-sharing companies Ofo (yellow) and Mobike (orange and silver) are parked in front of the Notre Dame Cathedral in Paris on July 2. Photo: VCG

(Beijing) — Bike-sharing giant Ofo plans to slim down its Asia operations to four overseas markets — Japan, South Korea, Hong Kong and Singapore — as it focuses on its most promising areas in a bid to become profitable, a knowledgeable source told Caixin.

The Asia-slimming exercise is part of a broader campaign for Ofo’s international business as the cash-strapped company faces increasing pressure both at home and abroad from top rival Beijing Mobike Technology Co. Ltd.

Ofo’s decision to focus on the four Asian markets comes as the company reportedly gets set to leave Australia, according to local media reports this week. Those reports said Ofo will wind down operations in the cities of Adelaide and Sydney in the next two months, and the company has begun removing bikes from the streets.

A company spokeswoman could not confirm the reports, but said Ofo currently operates in the Asian markets of Japan, Singapore, South Korea, Thailand, Malaysia, India and Hong Kong. She cited an earlier statement saying the company’s future international strategy will focus on “priority markets outside China.”

In addition to slimming down its Asian business, Ofo is cutting staff in in the four remaining markets where it expects to continue operations, said the source, who had been briefed of the plan, speaking on condition of anonymity because the plan isn’t public. He said the company will “slim down the teams to a minimum and focus on increasing efficiency and profitability rather than market expansion.”

At the height of its breakneck expansion, Ofo was operating in more than 20 markets, from Singapore to as far as away as Los Angeles. But in May the company launched a 100-day plan to transform itself from cash-burner to money-earner.

“While the overseas market grows rapidly, diverse user habits and demands have also created new challenges for us,” said Dai Wei, company founder and CEO, “In the new strategic phase, we will further refine our management and provide more differentiated services.”

Founded in 2015, Ofo and its rivals have revolutionized the shared-bike industry by using technology that allows subscribers to pick up and unlock bikes anywhere they can find them, and then simply lock them anywhere when they are finished. But after raising and spending hundreds of millions of dollars in cash, Ofo and Mobike have come under pressure from impatient investors who want them to find a sustainable business model.

Ofo has come under even more pressure following the acquisition of Mobike earlier this year by Meituan-Dianping, China’s largest online service platform. That pressure intensified last week when Meituan-Dianping announced it will no longer require subscribers to make deposits and will refund existing deposits, even as Ofo said it had no such plans to make a similar move.