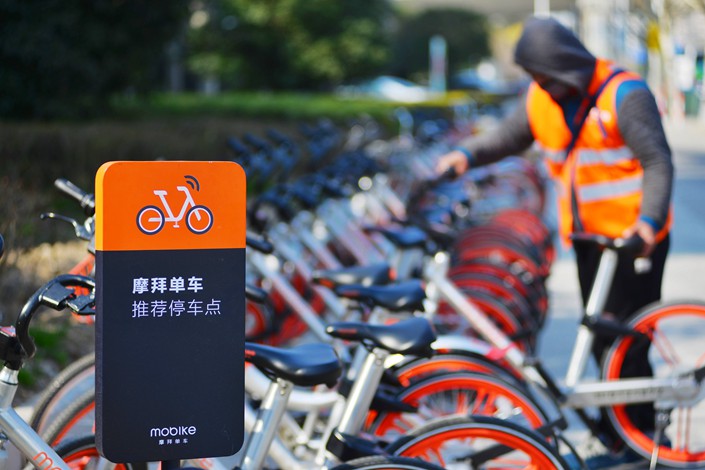 A worker lines up Mobikes at a roadsite parking site in Shanghai on March 2, 2017. Photo: IC

Mobike announced Thursday that it has stopped taking deposits from users for its popular bike-sharing platform in an attempt to pedal further ahead of its rivals.

New users of Mobike no longer have to put up a 300 yuan ($45.20) deposit, and the platform’s 105 million current users are now eligible to get their deposits refunded, the company said at a media event in Beijing.

Mobike’s goal is establish “a no-threshold, zero-burden and zero-condition deposit-free standard for the entire bike-sharing industry,” the company said in a statement.

Deposits have been a point of contention in China’s bike-sharing industry as startups have been accused of inappropriately employing user funds to expand their businesses.

Mobike users pay 1 yuan to ride one of the platform’s immense fleet of bicycles for up to 30 minutes. The platform is the industry leader in China, where dozens of competing startups have fallen since 2016. The market is now dominated by three players — Mobike, Ofo and Hellobike.

Mobike’s decision to do away with deposits is expected to pose a serious challenge to cash-strapped Ofo, which has recently struggled to find a wealthy backer to maintain its business. In June, Ofo announced that it would call off a program in partnership with Ant Financial Services Group, an affiliate of Alibaba Group Holding Ltd., that allowed users in 20 cities to ride without making a deposit. Last month Ofo announced a 100-day plan to transform itself from cash-burner to money-earner.

Hellobike, a second-tier player, has grown rapidly recently. The startup announced in June that it had secured a 1.9 billion yuan investment from Alibaba in its latest fundraising round, which valued the company at $1.47 billion.

Mobike also announced plans for its platform to be integrated into Meituan, allowing users to unlock bikes with the Meituan app.