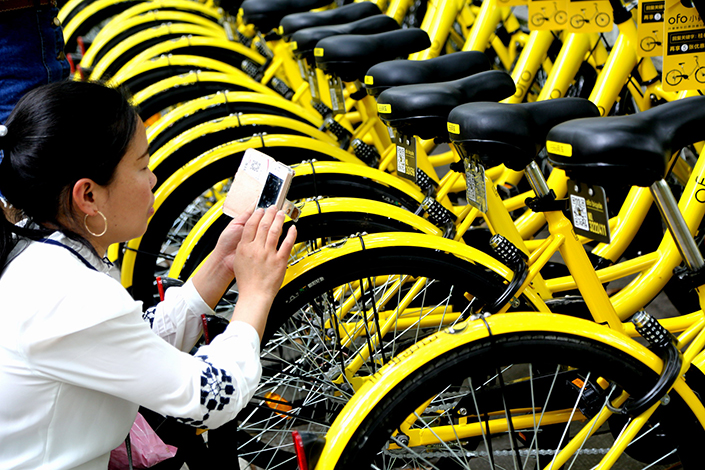 Shared-bike operator Ofo said on Thursday it has raised a fresh $700 million in new funds, keeping pace with rival Mobike as the pair collectively race for dominance in the fledgling space.

Ofo Inc. said its latest funding round was led by e-commerce giant Alibaba Group Holding Ltd. and Russia’s DST. Others included fellow shared-economy specialist Didi Chuxing, which emerged as victor in the car-services space after a similarly brutal war with global titan Uber Technologies Inc. Domestic investors Hony Capital and Citic rounded out the list of investors announced by Ofo in its latest announcement.

Ofo said the funding makes it the world’s most valuable bike-sharing company, though it did not provide a specific figure. A media report last month indicated the company was aiming to achieve a valuation of $3 billion in the latest round.

The latest mega-funding comes just three weeks after Beijing Mobike Technology Co. announced its own fresh capital-raising worth $600 million from a group that included internet titan Tencent Holdings Ltd., as well as banking giants ICBC and Bank of Communications.

“Going forward, we hope to take a step forward to raise our users’ experience to the next level and accelerate our presence both at home and abroad to continue promoting development of the shared-bike industry,” Ofo CEO Dai Wei said. “Our hope is to make sure no corner of the world is a stranger, to make Ofo a global common language.”

In announcing its latest funding, Ofo also unveiled updated operating statistics that show it now operates a fleet of 6.5 million of its trademark yellow bikes in 150 cities, mostly in China but also in four other countries. It said it eventually plans to have 20 million bikes this year alone, expanding its range to 200 cities by year-end in 20 countries. The service now boasts more than 100 million subscribers who make more than 25 million rides daily.

Founded by students from Peking University, Ofo began its life as a shared-bike service focused on university campuses before embarking on its massive expansion about a year ago. It and Mobike have collectively raised more than $2 billion to date, including Ofo’s $450 million in March from a group that also included Didi Chuxing, DST and Citic.

Both Ofo and Mobike have taken the industry by storm with services that let users unlock and borrow bikes for short rides using smartphone-based technology, and then park them essentially anywhere they want. That differs from older municipal bike services, which require more complex registration and force users to pick up and drop off bikes at designated racks.

The industry has spawned a field of about a dozen copycats, but the race for supremacy is quickly boiling down to just Mobike and Ofo. In the last two weeks alone, two smaller operators, Wukong and V3bike, have both called it quits after large numbers of their respective bikes were stolen.