China’s Paper City Could Become a House of Cards

By Yu Hairong and Leng Cheng 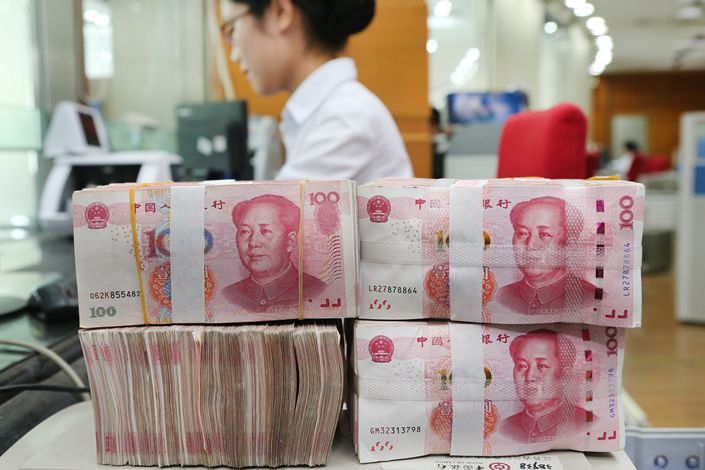 A Chinese credit ratings agency has warned it may cut the ratings on a $177 million bond issued by the city of Leiyang’s local government financing vehicles. Photo: VCG

Leiyang has been known for centuries in China as “Paper City,” the hometown of Cai Lun, the inventor of papermaking technology. In modern times it built a reputation as a major coal producer, and at its peak was one of the country’s top 100 coal-mining counties.

But now, Leiyang is gaining fame for a less auspicious reason — the state of the local government’s finances. The county-level city in the central province of Hunan hit the headlines in June after admitting it didn’t have enough money to pay the salaries of its civil servants in May because of a sharp decline in revenue from the real estate and coal industries.

In a July 27 report, Pengyuan Credit Rating Co. Ltd. revised the outlook on the bond to negative from stable, a warning to investors that the credit rating itself could be cut. The bond, which was issued in 2015, currently has the agency’s third-highest corporate rating of AA, the minimum ranking many funds require before they will invest.

Pengyuan’s decision is the latest signal that stresses in China’s local government sector are rising as the central authorities pursue their campaign to rein in public debt and force local governments to come clean about the extent of their liabilities. Crackdowns on shadow banking and public-private partnership projects, two key fundraising channels for LGFVs, are adding to the pressure on many local authorities already struggling to increase revenue from taxes and fees amid an economic slowdown.

The report outlined the company’s precarious financial position, pointing out that it has a weak revenue base and a relatively low ability to repay its debts. The central government’s campaign to tighten regulations on local government borrowings and growing pressure on Leiyang city related to the repayment of debts taken on by other LGFVs and state-owned enterprises add to concerns over the company’s financial health, the report said.

Pengyuan’s warning comes as some of the units of the Leiyang LGFV are caught up in money problems. More than 10 financial leasing companies have failed to make interest or principal payments on their borrowings and some of the debts are now three to four months overdue, according to information obtained by Caixin.

The LGFV has 11 units managing investments for infrastructure projects across the city such as land development and water supply, according to Pengyuan’s report. Among those, Leiyang Running Water Co. failed to repay the principal and interest on a 68 million yuan entrusted loan due May 11. The report did not specify the current situation regarding the payment, but said the company was still negotiating with lenders as of May 15.

Leiyang City State Owned Asset Investment Operation relies heavily on local government support, with more than 68% of its total profit coming from government subsidies in 2017, according to Leiyang’s annual budget report released in March. But with growing strains on the city’s finances from slumping taxes, the Ministry of Finance’s crackdown on local government debt and the use of LGFVs as funding vehicles, it remains to be seen how much longer it can shore up the company.

According to Leiyang’s 2018 budget report, the city’s outstanding government debt surged 162.5% to 13.03 billion yuan in 2017. On top of that, liabilities that it would bear some responsibility for repaying if they went bad soared by 8.28 billion yuan to 10.55 billion yuan. It’s not clear how much of the increases are due to new rules that force local governments to bring debts hidden off the budget back onto their books.

Leiyang is also being squeezed on the revenue side. According to Pengyuan’s report, its fiscal income has fallen short of projections every year since 2012 due to the continued decline of coal-related industries, traditionally a key source of money. Total revenue, including subsidies and the proceeds of land sales, fell by 10.7% to 6.13 billion yuan in 2017, although it still managed to spend less than it took in, listing expenditure for the year at 5.81 billion yuan.

Li Lianfei, the director of Leiyang’s Finance Bureau, warned at a budget meeting in March that the city’s traditional pillars of fiscal income had disappeared and that the government’s coffers were seriously inadequate. Officials were struggling to find sources of funds to resolve the city’s cash crunch, he said.