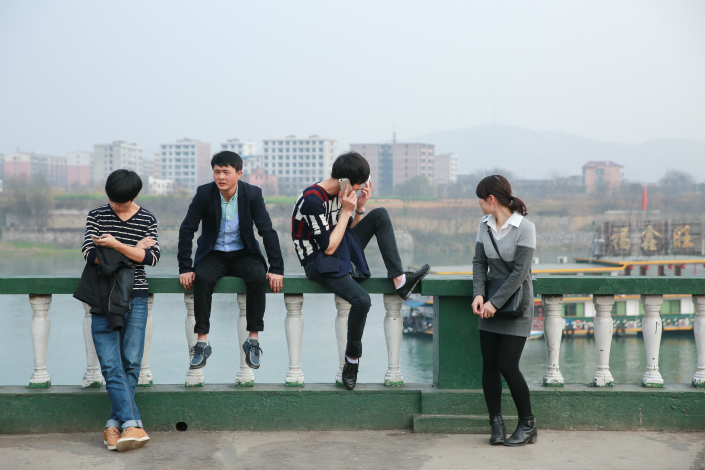 Young people take a break near the river in Leiyang, Hunan province, in February 2015. Photo: VCG

(Beijing) — Once one of Hunan province’s fastest-growing economies, the coal city of Leiyang has admitted that it failed to pay civil servant salaries in May.

The admission has aroused concerns about the county-level city’s financial status amid an ongoing local recession and tightening restrictions on local government borrowing.

The statement attributed the failure to pay the salaries to a shortage of funds in government coffers.

Leiyang has failed to collect as much annual revenue as it had projected since 2012 due to the continued decline of coal-related industries, which used to be the city’s key revenue source, according to the statement. In the first five months of this year, Leiyang’s government revenues dropped 15.4% year-on-year to 807.3 million yuan ($126.1 million).

On the other side of the ledger, government spending on salaries and public goods has grown each year, leading to a gradually deteriorating fiscal situation, the statement said.

Caixin has learned that the Ministry of Finance has sent officials to Leiyang to investigate the situation.

The Leiyang government has contacted the Hunan Provincial Department of Finance to seek a transfer of funds, and urged local finance departments and taxation agencies to collect revenues as soon as possible in a bid to raise enough money to pay the salaries, the statement said.

The LGFVs each need to repay 20% of the principal every year from 2018 to 2022, according to the bond prospectuses. One LGFV needed to make its first principal repayment of 140 million yuan on April 10, while the other has to repay 600 million yuan in principal on Nov. 26.

No evidence has come to light linking the LGFVs’ debt repayment to the city’s failure to pay salaries. However, some local governments have tried hard to collect money to help repay LGFV debt, as tightening regulations targeting local government borrowing makes these companies’ financing even harder, according to Finance Ministry officials with knowledge of the matter.

Leiyang’s outstanding government debt rose 162.5%, or more than 8 billion yuan, from a year earlier to 13 billion yuan at the end of 2017, according to its budget report.

In 2015 and 2016, the city government’s tax revenues declined for two consecutive years, but its nontax revenues increased by annual rates of 53% and 32% respectively, according to government budget reports.

The drop in Leiyang’s tax revenues in 2016 was mainly due to the real estate and economic recession, which had led to the contraction of the land appreciation tax and deed tax, said rating consultancy Pengyuan Credit Rating Co. Ltd. in a bond rating report that involved a bond issued by an LGFV in Leiyang.

In 2017, Leiyang government’s nontax revenues decreased sharply by 49%, according to official data. In the first four months of this year, the figure continued to drop, down by 71% year-on-year.