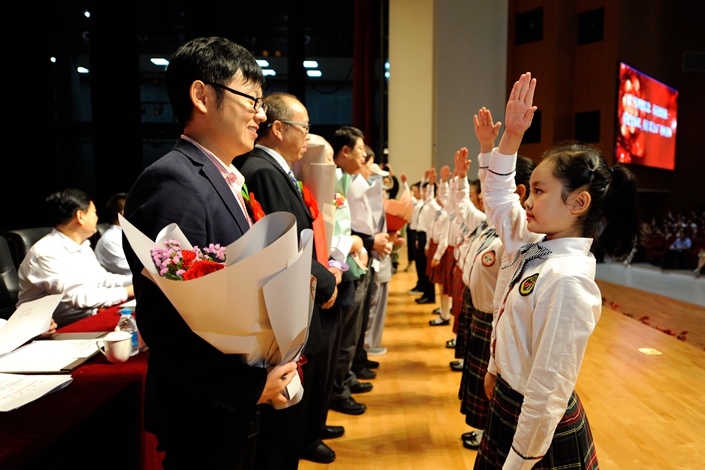 Cases of local government employees in China demanding overdue wages have emerged recently, causing widespread concern. The stories vary, but most of them have the same root cause: the uncovering of local government debt risk, and the subsequent financial restructuring.

In recent years, the central government has made great efforts to rectify local governments’ illegal borrowing to liquidize stocks, and to strictly control expansion. This effort has had some results, but the situation is still grim. For many local governments, the impulse to borrow is undiminished. In some regions, the process of cleaning up hidden debt has merely pushed governments to disguise debt more subtly. Additionally, deteriorating economic situations and growing financial constraints have meant that some local government financing platforms are no longer able to pay off interest. Local government debt risk is very likely to turn into a crisis.

It should be noted that in China today, higher levels of government provide “hidden” assistance to lower levels of government in a number of ways, including subsidies and special transfer payments, as well as “poverty alleviation” measures that exceed the scope of the official poverty alleviation policy. These methods hinder efforts to create hard budget constraints.

In order to strengthen constraints on local debt, China must pay extra attention to transparency. The Chinese government does not have a particularly large volume of visible debt. But no one knows for sure how much hidden debt it has, with estimates varying greatly. The difficulty of measuring hidden debt itself poses a massive risk. All local governments are required by the central government to regularly disclose debt to the public and accept supervision. However, the reality is that local governments often get to decide how and what to disclose. The lack of disclosure could be due to a local government’s poor bookkeeping, its low confidence in its ability to repay debt, or its attempts to lie low while waiting for assistance from higher levels of government.

Many local governments have attempted to comprehensively measure their debt since the end of 2017. Hopefully, these local governments will reveal the results of their calculations to the public instead of keeping them secret.

An important factor allowing local governments to borrow without restraint is the lack of effective external supervision. In order to strengthen constraints on local debt, China should make good use of the supervisory role of local people’s congresses. This is clearly required by laws and regulations, and is also the general consensus of political and business circles. However, the reality is worrying. Some local people’s congresses have actually deliberated and approved irregular borrowing and debt guarantees by local governments. This shows, once more, that there is a need to take a step back from debt in order to handle it appropriately.

In order to regulate local debt, China needs firm, unwavering policies and measures, as well as a better system. It especially needs to strictly implement its government budget law and other laws and regulations. China urgently needs to enact government investment regulations, which have been a work in progress since 2001. Once these regulations are in place, they will undoubtedly play a significant role in managing local investment, reducing local debt risk and enhancing transparency in government investment. They should focus on regulating investment even as they bestow rights on local governments.

The central government’s strict adherence to the “no bailout” rule is not a sign of indifference to the risks faced by local governments. Rather, it emphasizes the importance of standardized borrowing and the primary responsibility of provincial-level governments. If local governments can invent all sorts of borrowing methods, they can also be equally inventive when it comes to repaying debt. In addition to building sound and standardized local government debt financing mechanisms, China should also ensure that governments at all levels have abundant resources for handling debt risk. In addition to streamlining institutions, payrolls, and administrative expenses, local governments can also sell assets, shrink their balance sheets, and change the size of their holdings in local state-owned enterprises. This would also promote mixed-ownership reforms, killing two birds with one stone.

Local government debt has become a deeply entrenched problem. It has its roots in the country’s fiscal and tax systems, the distorted view of political achievements held by promotion-hungry officials, and the industrial structure of China’s economy. Thoroughly removing the conditions for illegal local borrowing will therefore require a reform of the fiscal and tax systems, as well as high quality development and the modernization of the country’s governance system and capabilities.