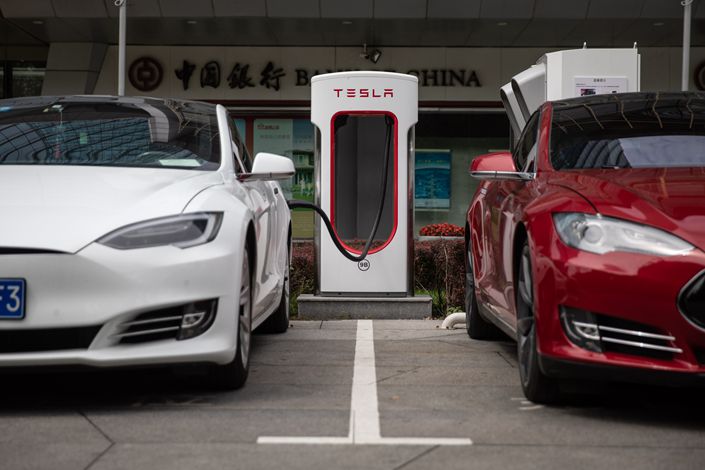 Tesla automobiles recharge in front of the Tesla China headquarters in Beijing on July 25. Photo: IC

Electric-car maker Tesla Inc. has said it will use local debt to fund its factory in Shanghai, the company’s first outside the U.S.

The factory — dubbed the Gigafactory 3 —– will be largely funded through local debt, according to a letter CEO Elon Musk sent to shareholders on Wednesday. The letter offered no specifics regarding the debt.

In a conference call on the same day, Musk said the factory — on which construction is expected to start within the next few quarters — will cost less than half of the initial estimate of $5 billion. “I think we learned a tremendous amount with Gigafactory 1; it’s probably closer to $2 billion,” said Musk, referring to a Tesla factory in Nevada.

Last month, Tesla signed agreements with the Shanghai authorities to set up a vehicle assembly plant in the city.

The capacity of the factory will grow from the initial stage of about 250,000 vehicles to 500,000 eventually. The first cars are expected to roll off the production line in about three years, according to Musk.

The establishment of Tesla’s China factory comes at a time when trade tensions between the U.S. and China have rattled the auto industry. In May, Beijing announced reduced import duties for select cars to 15% from 25%, prompting Tesla to cut the prices of its Model X and Model S vehicles sold in the country by about 6%. However, Tesla jacked the prices of its electric cars back up after Beijing raised the auto levy from 15% to 40% last month in retaliation for the U.S. government’s new tariffs on $34 billion of Chinese goods.

Musk implied that the trade tensions have posed a challenge to his company’s performance in the country, a market that contributes more than 15% of its revenue.

“While tariffs on vehicle imports to China have recently decreased to 15%, imports specifically from the U.S. have increased to 40%.” said Mush, adding that Tesla had to adjust pricing in China in order to partially offset this increased cost.

“This will likely have some negative impact on our volumes in China in the near term,” he added.