By Jason Tan and Zhang Erchi 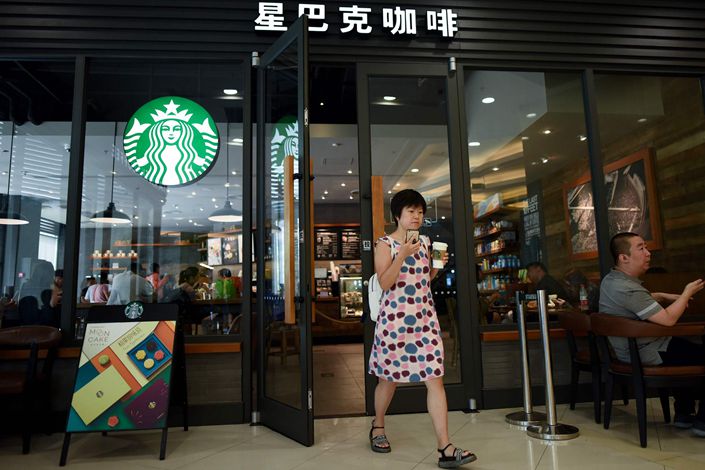 A Starbucks store is seen in Beijing on Thursday. Photo: VCG

* Starbucks and Ele.me will launch the service in September at 150 Beijing and Shanghai stores

* Experts said Starbucks move is a response to competition from local coffee chains, which have taken advantage of Starbucks’ higher prices and slower adaptation to emerging internet trends

(Beijing) — Starbucks Corp. has finally entered China’s booming food-delivery sector, announcing a partnership with Ele.me that aims to cover 30 cities and over 2,000 stores by the end of this year.

The tie-up with the Alibaba Group Holding Ltd.-owned platform comes as the Seattle-based coffee giant faces heated competition in China as domestic rivals use steep discounts and internet-powered convenience to vie for the country’s growing number of coffee drinkers.

Starbucks and Ele.me will launch the service in September at 150 Beijing and Shanghai stores, the companies announced at a news conference in Shanghai on Thursday.

“Our transformational partnership with Alibaba will reshape modern retail, and represents a significant milestone in our efforts to exceed the expectations of Chinese consumers,” said Kevin Johnson, Starbucks’ president and CEO, in a statement. “Starbucks China is one to watch, and I have full confidence in the team that will bring the new innovation behind the ‘Starbucks Experience’ to life.”

Starbucks said that deliveries will be completed within 30 minutes. It will also establish “delivery kitchens” inside branches of Hema, a supermarket chain under Alibaba that has both an online and offline presence, leveraging the latter’s logistics system to fulfill delivery orders.

According to Matthieu David-Experton, CEO of Shanghai-based retail researcher Daxue Consulting, Starbucks didn’t see the need to jump onto the delivery bandwagon earlier as its brick-and-mortar stores were doing very well without such a service.

It could also have worried that its premium image would have been undermined if it offered delivery services through a third party, he said.

Luckin Coffee, a 7-month-old startup based in Beijing, charges about 15% less than the average price of a cup of Starbucks coffee — 30 yuan ($4.40). It also allows customers to order their drinks through a mobile application, which notifies them when it is ready to be collected from the nearest branch.

In addition to aggressive promotions such as cups of coffee for new customers, Luckin on Wednesday rolled out a menu for light snacks (link in Chinese), saying it uses the same suppliers as Starbucks but sells cakes and muffins for least 30% less than the U.S. company.

As of July 31, Luckin operated 809 outlets across 13 cities and said it intended to increase that number to 2,000 by the end of this year. Starbucks has 3,400 stores in China and plans to almost double that by 2022.

Wang Luyao contributed to the report.