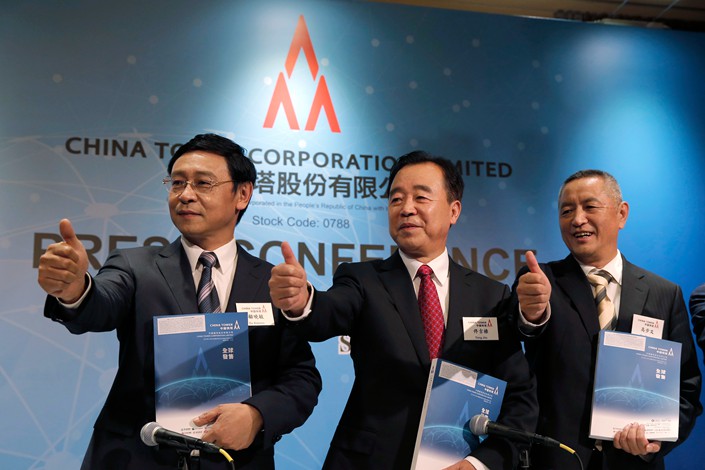 The share price went as high as HK$1.29 in morning trading, but had retreated to the offering price at the noon close on the Hong Kong Stock Exchange.

China Tower is the world’s largest operator of mobile telecommunications towers. It had priced its IPO at the lower end of HK$1.26 to HK$1.58. The company successfully raised at least HK$54.3 billion, making it the biggest listing anywhere since the Postal Savings Bank of China raised HK$56.6 billion in 2016.

China Tower’s float came after another blockbuster listing, Xiaomi Corp., raised HK$37 billion in early July. The world’s fourth-largest smartphone-maker was met with a lackluster reception, opening down 2.3% in its trading debut before soaring 13% on the second day.

Analysts said cash-strapped China Tower might face some head winds in its bid to attract investors. It had planned to list last year, but delayed its IPO due to a tepid reception. Earlier reports indicated the latest offering was also met with relatively tepid demand due to the mature nature of the business and its limited growth potential.

The operator has been struggling with its massive debt to the three major telecom operators — which are also its stakeholders — after purchasing their tower assets, a source close to the company told Caixin in July (link in Chinese).

China Tower was formed in 2014 through a pooling of the base stations owned by China Mobile Ltd., China United Network Communications Group Co. Ltd. (China Unicom) and China Telecom Corp. Ltd. — which all became major stakeholders in the new company.

The move came under a directive of the Chinese telecom regulator, following trends in more mature markets like the U.S., where carriers sold off their towers to independent operators so they could focus on their wireless networks.

The telecom operators had their stakes in China Tower diluted after the IPO. China Mobile currently holds 28.5%, China Unicom owns 21.1% and China Telecom 20.9%.

An inside source told Caixin that China Tower had to pay back at least 91.9 billion yuan ($13.4 billion) to the three wireless carriers by the end of last year, while it is in dire need to raise fresh capital to build “hundreds of thousands” of new base towers to fulfill China’s aspirations to lead the world in the upcoming fifth-generation mobile networks.

China Tower Chairman Tong Jilu said in July that the company has earmarked a capital expenditure of 34 billion yuan this year. Total spending hit 370 billion yuan between 2015 and 2018, according to Caixin’s preliminary calculations.

China Tower has said in its prospectus that it will use 30% of its IPO proceeds to finance its loans, while allocating as much as 54% to maintain existing base stations and build new ones.

Liu Yanfei contributed to this report.