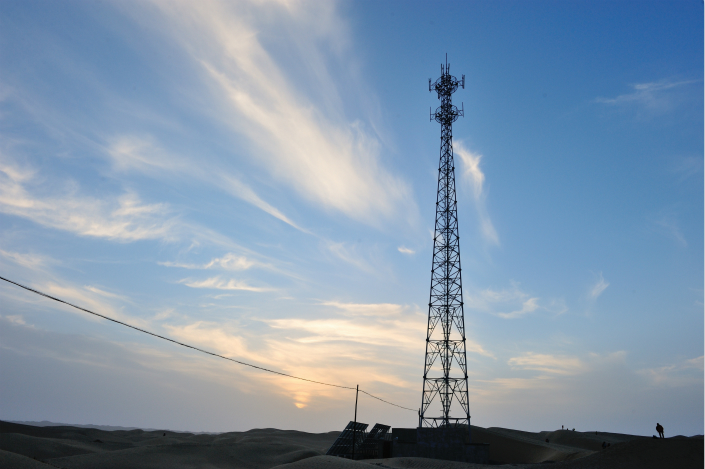 A mobile base station deep in Xinjiang's Taklamakan Desert. Unicom’s Hong Kong-listed shares were down 0.5% in late afternoon trade on Friday, while China Telecom was up 0.3% and China Mobile was down 1.4%. Photo: IC

* The announcement precedes an expected listing for China Tower Corp, which was spun off from the carriers in 2014

* The move is likely to boost the earnings of the wireless companies, but may hit the value of the tower operator

(Beijing) — China’s three wireless carriers have announced terms for leasing base stations from a recently formed company created by pooling their former cellular tower assets, as the tower operator prepares for a Hong Kong IPO likely to be one of this year’s largest.

China Mobile, China Unicom and China Telecom simultaneously announced terms for their use of base stations run by China Tower Corp. Ltd., according to filings made by the three companies late on Thursday to the Hong Kong stock exchange. Such simultaneous filings are common for the trio, which are all major state-owned enterprises controlled by Beijing and take their orders from the nation’s telecommunications regulator.

The three previously spun off their base station assets, consisting of thousands of antennae-hosting towers across the country, under a plan crafted by the telecommunications regulator, the Ministry of Industry and Information Technology (MIIT). Such a move is consistent with arrangements seen in Western markets like the U.S., where independent companies often own and operate towers that are leased by wireless carriers for use in their coverage networks.

The latest filings contain specific finalized leasing terms that each carrier expects to pay to China Tower. The final terms should have the greatest benefit for Unicom, boosting its 2018 earnings by around 8.2%, according to a research note by Jefferies, which called the terms a “win-win-win” for all three carriers. It said China Telecom should see 2018 earnings rise by 3.2%, while leading carrier China Mobile could receive a modest 1.1% earnings upside.

Unicom’s Hong Kong-listed shares were down 0.5% in late afternoon trade on Friday, while China Telecom was up 0.3% and China Mobile was down 1.4%.

While the carriers should benefit from the final deal, China Tower’s own value could fall by around 15% as a result of the final terms, which are more advantageous to the carriers than those discussed earlier, Jefferies said. That would take China Tower’s value down to about 200 billion yuan ($31 billion), according to the note.

“The conclusion of the negotiation of the lease terms will clear the path for China Tower's IPO,” wrote Jefferies analyst Edison Lee. “We now believe that the IPO could take place as soon as March or April,” he added, saying the offering could be worth around $8 billion.

China Tower is a joint venture of the three major carriers, and was officially set up in 2014 under the direction of the MIIT. The company selected a group of investment banks including China International Capital Corp. (CICC) and Goldman Sachs in the middle of last year to make an IPO in Hong Kong worth up to $10 billion, according to previous media reports. Those reports said such a deal was likely to happen by June this year.