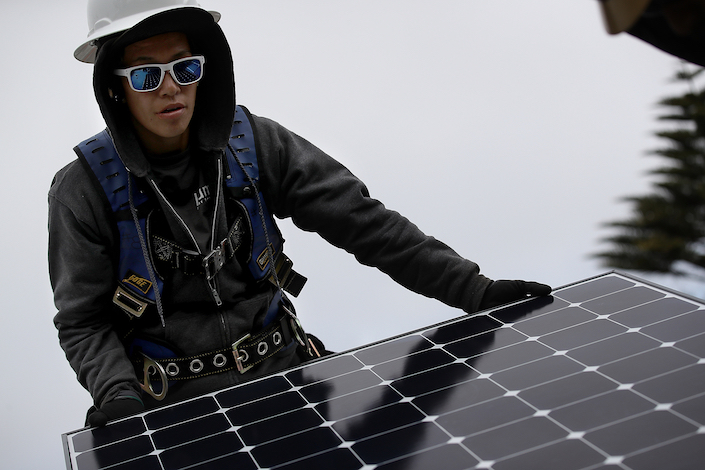 A worker installs a photovoltaic panel in San Francisco on May 9. Photo: VCG

A Chinese buyer has scrapped a year-old plan to buy three California solar farms, becoming the latest victim of growing U.S. efforts to block investments in sensitive areas under the administration of President Donald Trump.

Shenzhen Energy Group Co. Ltd. said it was terminating the deal to buy the plants after failing to get approval from the Committee on Foreign Investment in the United States (CFIUS) within an agreed time frame, according to a stock exchange announcement dated on Thursday. (link in Chinese) The company had agreed in October to buy the plants for $232 million from Recurrent Energy, the solar farm developing arm of panel maker Canadian Solar Inc.

“After many communications with CFIUS, this transaction couldn’t … receive CFIUS’ approval within the agreed-upon period, and it was impossible to expeditiously achieve a result in accordance with our previous plans,” Shenzhen Energy said in the statement. It added the seller had notified it on Aug. 4 of its intent to terminate the agreement due to failure to get necessarily approvals within the agreed time frame.

Shenzhen Energy said that termination of the deal wouldn’t have any significant financial impact on the company. The company’s shares rose 1.4% in Thursday trading in Shenzhen.

The three plants involved in the transaction were in the California areas of Rosamond, Tranquillity and Lemoore. Project developers like Recurrent Energy typically build such plants using short-term financing, and then sell them off to long-term investors like Shenzhen Energy upon completion.

The deal was the latest in a growing string to collapse in the U.S. due to heightened scrutiny by the Trump administration. That scrutiny could get stronger still in the months ahead, following the recent passage of legislation in Congress that will increase scrutiny of Chinese investments in the U.S.; Trump is scheduled to sign the bill into law early next week.

In one of the largest major deals to collapse in recent months, the debt-ridden HNA Group in May abandoned its bid to buy a majority stake in U.S. hedge fund SkyBridge Capital some 15 months after reaching a deal, citing uncertainty of the approval process. Ant Financial Services Group, the financial affiliate of e-commerce giant Alibaba, also had to scrap its $1.2 billion plan to buy U.S. money transfer specialist MoneyGram International in January after failing to get CFIUS approval.