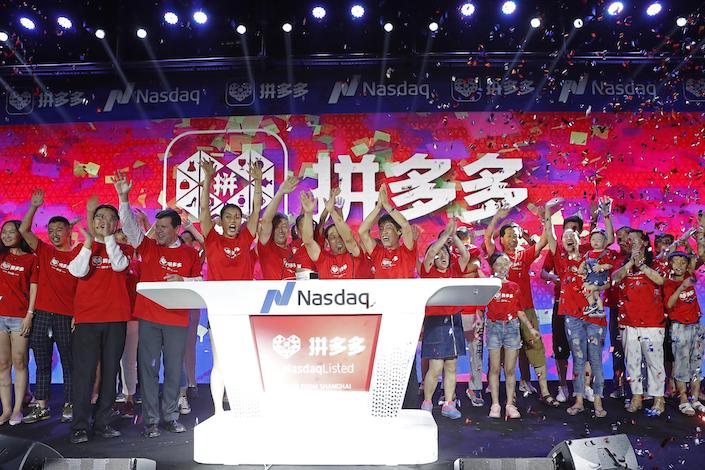 Pinduoduo Inc. has become even more (in)famous in China since its American depositary receipt (ADR) listing on the Nasdaq Stock Market two weeks ago. A comment posted under the TechCrunch article “The Incredible Rise of Pinduoduo,” on July 26, is typical of the tsunami of online opprobrium since the announcement: “That’s a real shame for PDD (Pinduoduo) got IPO in USA. … We here in China all know that PDD sell fake products, … they got very bad reputation in China.”

Now that overseas investors/speculators can play, a flurry of English-language articles about PDD have appeared. But as the online commentator quoted above indicates, few in China aren’t aware of the country’s latest e-commerce rock-star company.

And “rock star” with all the potential negatives of the phrase — perceived by many, judging by the social media explosion starting just before the listing, to exhibit the business equivalent of some infamous people’s anti-social and even self-destructive behavior. National Business Daily joined others in reporting that nearly two-thirds of the products on Pinduoduo are counterfeit (link in Chinese). Not surprisingly, in a press conference on July 31, Pinduoduo founder Huang Zheng asserted that there are far fewer counterfeit products than the media estimates, while co-founder Da Da suggested that counterfeiting is a society-wide problem, that, “It’s unfair to ask the 3-year-old Pinduoduo to solve it.”

The listing has also heralded a dramatic increase in scrutiny by China’s regulators, notably the State Administration for Market Regulation. A Chinese diaper company named (oddly) Daddy’s Choice has sued Pinduoduo in U.S. federal court for selling counterfeit versions. And Caixin joined others in reporting that a group of six U.S. law firms “are looking into potential securities claims and may file class-actions suits on behalf of people who bought Pinduoduo Inc. shares on Nasdaq.” Why should such a company seek such scrutiny?

Plenty of netizens are complaining that Pinduoduo passed U.S. Securities and Exchange Commission (SEC) review, and that the company, by listing, has exposed more sleazy business practice in China to world scrutiny, causing China to lose face globally. One online commenter said, “This is like the bad old days of Taobao — we’ve made so much progress in the last decade or so — Pinduoduo is dragging our image back into the era of ‘fake China.’ ”

PDD’s listing via ADRs as an “emerging growth” company allows it a lower level of SEC scrutiny, though it is now on a path toward steadily more stringent SEC requirements. But that it wanted to list at all, at this relatively early stage of the company’s development, when the foundation of its business is transactions of questionable products, remains a mystery to many.

Pinduoduo’s backers — VC Sequoia Capital, Goldman Sachs as underwriter, and Tencent Holdings Ltd. — are obviously not as unsophisticated as a large portion of Pinduoduo’s customers are. Whatever Pinduoduo’s reasons for listing are, rank naivete is not likely one of them.

As William of Ockham suggested, the simplest explanation is usually the best. It’s hard to imagine Huang and his business partners not grabbing the brass ring (an extra $1 billion in cash, starring in a Nasdaq bell-ringing ceremony) when it appeared so tantalizingly close. The dazzle of money and fame has often blinded people to likely if unintended consequences.

Alibaba Group Holding Ltd. has invested vast sums and human hours in cleaning up its consumer-to-consumer platform, Taobao. But no good deed goes unpunished. Alibaba has left open a market segment that isn’t savvy about shoddy, counterfeit goods, or doesn’t care. Pinduoduo’s vaunted 300 million users are largely in that category. A dozen years ago, Taobao was quite popular with residents of China’s first-tier cities; many of these folks have evolved with China speed into more-discerning consumers, who now disdain outfits like Pinduoduo. However, many young to middle-aged housewives (the key demographic component of Pinduoduo users) and others in the provincial cities and towns are new to e-commerce and are still, like their first-tier-city cousins were back before the Beijing Olympics, extremely price-sensitive.

In a tasty bit of poet’s justice, Sina and others report this week that some Pinduoduo sellers of dodgy products are pushing back (link in Chinese) against the company’s attempts to rein them in. Several years from now, when 1) the above-mentioned housewives in the tier-3 and tier-4 cities have sufficient disposable income and societal awareness to demand legitimate, higher-quality goods, and 2) their cousins further afield become the market segment new to the latest technology and extremely price-sensitive, Pinduoduo may be as respectable as Taobao is now (though that’s rather hard to imagine these days), while an as-yet-unknown player fills the newest demographic vacuum of unmet demand.

History doesn’t repeat, but it does rhyme

In the late 19th century, tectonic changes like urbanization, rail transit and steam power forever transformed the United States and the world. Many of the U.S. business leaders of the era, endowed with more commercial savvy than social responsibility, earned the sobriquet “robber baron.” The title of Mark Twain’s “The Gilded Age” rapidly became the descriptor of the time in the United States — rapid economic growth combined with an increasing concentration of wealth, abject poverty for some, endemic corruption and world leadership in intellectual-property theft. Large swaths of society were disgusted with what Twain asserted was the gilding — a thin sheen of ostentation over some ugly social features.

Sound familiar? An entire category of journalism soon arose, called “muckraking,” whose practitioners addressed the sleaze and excess. One of the muckrakers, Upton Sinclair, wrote a book called “The Jungle,” about the horrors of the Chicago meat-processing industry. It landed on then-U.S. President Theodore Roosevelt’s desk and prompted the founding of today’s Food and Drug Administration.

We already see signs of China’s macroeconomic environment on a similar path. The 2015 documentary “Under the Dome” brought attention to China’s environmental problems like never before. And while the recent vaccine scandal is of course deplorable, the fact that people know about and are discussing it is promising, as is the reaction of many Chinese netizens to the listing of Pinduoduo. May that journey continue.

John D. Van Fleet, an adviser for Zhifei Consultancy, is also director of corporate globalization and an adjunct professor at the Antai College of Economics & Management of Shanghai Jiao Tong University.