By Meng Yewen and Han Wei 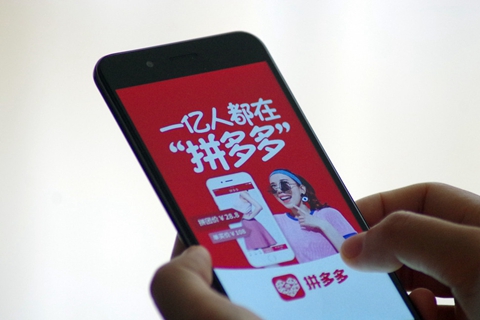 Pinduoduo is one of the fasted-growing e-commerce in China with 343.6 million users by the end of June. Photo: IC

Six U.S. law firms are looking into potential securities claims and may file class-action suits on behalf of people who bought Pinduoduo Inc. shares on Nasdaq, the firms said Thursday.

The threat of shareholder suits adds to setbacks for the Chinese discount e-commerce site. After Pinduoduo’s high-profile Nasdaq debut July 26, authorities in China opened investigations of the company for allegedly selling counterfeit goods. The stock fell to below the offering price.

The New York-based Rosen Law Firm said in a news release on Business Wire that it is investigating potential claims related to allegations that Pinduoduo may have issued materially misleading business information to the investing public. In the statement, Rosen invited Pinduoduo shareholders to sign up on its website to join a lawsuit.

Pomerantz LLP, another New York law firm, said it is investigating whether Pinduoduo and certain of its officers and directors engaged in securities fraud or other unlawful business practices. The Schall Law Firm of Los Angeles is looking into whether Pinduoduo issued false or misleading statements or failed to disclose information pertinent to investors, Schall said in a statement.

On Wednesday, China’s State Administration for Market Regulation ordered commerce regulators in Shanghai, where Pinduoduo is based, to investigate the company for allegedly selling counterfeit goods.

The news led to a sell-off of Pinduoduo’s newly listed American depositary receipts in New York. ADRs are negotiable certificates issued by a bank and represent equity in a foreign company. In intraday trading Wednesday, Pinduoduo plunged more than 16% to $18.68, falling below the offering price last Thursday of $19. Pinduoduo’s market cap has shrunk from a peak of $30.5 billion to around $24 billion by Thursday.

Pinduoduo’s ADRs had finished their first trading day up more than 40% from the listing price. The $1.63 billion initial public offering, one of the biggest flotations by a Chinese enterprise this year, was oversubscribed 20-fold by investors that included Fidelity Investments and the sovereign funds of Abu Dhabi.

Pinduoduo is one of the fastest-growing e-commerce sites in China and had served 343.6 million shoppers by the end of June. The three-year-old company is China’s third-largest e-commerce business in terms of sales, behind Alibaba Group Holding Ltd. and JD.com Inc.

It is noted for its group-purchase model that encourages buyers of groceries, electronics and other goods to invite friends to join together in qualifying for discounts. But the company has been surrounded by allegations of selling shoddy and knockoff products on its platform.

Colin Huang, founder and chairman of Pinduoduo, told media Tuesday that Pinduoduo has been working to remove fake products sold by vendors on its platform. “I can’t promise that there are zero shoddy products on the platform, but in terms of proportion, it will be lower and lower,” he said.

Pinduoduo may become the latest Chinese company to face class-action litigation in the U.S. In December, online microlending platform Qudian was sued by law firms including Rosen and Faruqi & Faruqi for allegedly making false and misleading disclosures. The case was filed two month after Qudian’s New York IPO.

In 2015, Chinese e-commerce giant Alibaba Group Holding Co. Ltd. was sued in the U.S. for making allegedly false disclosures related to fake products. The case was thrown out by the court in 2016.