With Mao at Its Heart, Village Gets Rich 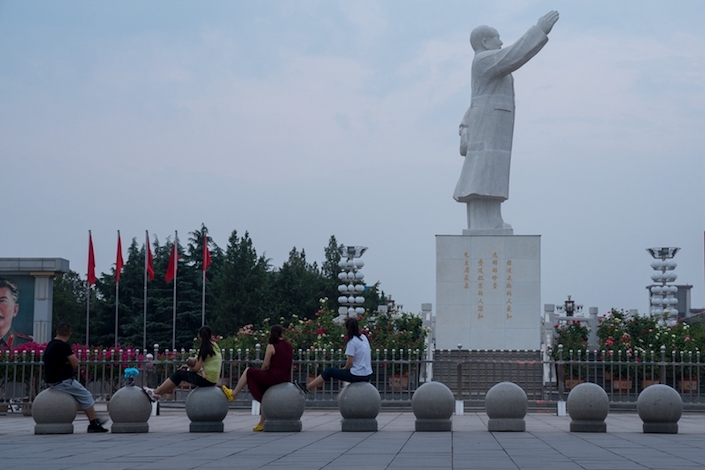 Visitors take a break at the Dongfang Hong Square at the center of Nanjie village, where a statute of Mao Zedong is visibly seen. Photo: Chen Liang/Caixin

Nanjie, in Central China’s Henan province, is one of the country’s wealthiest villages, shooting to national and arguably international fame for growing its economy from merely 700,000 yuan in 1984 to 1.2 billion yuan a decade later.

The village, with a population of 3,700, is home to more than two dozen businesses as diverse as food processing, beverages, liquor, printing and pharmaceutical manufacturing, which together sell goods worth more than 2 billion yuan ($293 million) a year.

But the village in Henan’s Linying county, about 500 miles southwest of Beijing, maintains in many ways what China used to look like under the planned economy decades ago — communism-themed billboards and banners everywhere; a giant statute of the late Chairman Mao Zedong notably placed at the heart of the village; and a supermarket that’s run like a commune.

Nanjie has even built a theme park dedicated to the history of the Chinese Communist Party, with re-creations of historic events that defined the party.

Tens of thousands of nostalgic visitors trickle every year into Nanjie, often called “a living fossil” of China under the planned economy, to catch a glimpse of what China looked like before the country’s reform and opening-up of the late 1970s. Among the guests have been senior party and government leaders such as Zhu Rongji, who retired as the country’s premier in March 2003.

Chen Junzheng, a middle-ranking cadre with a printing company in Nanjie, attributed the success of the village to entrepreneurship that locals have embraced, and the socialist legacy that remains intact in his town, including strong discipline and the sacrifice for collectivism.

Like most villagers, Chen said he wakes up early in the morning every day to loudspeakers blaring the strains of “Dongfang Hong” (“The East is Red”), a classic song that was the de facto national anthem during the Cultural Revolution of 1966-76.

He arrives at his factory at 7:15 every morning and begins the day by singing a classic “red” song with other workers.

While income for ordinary villagers has been rising steadily over the past decades, all middle-ranking cadres in the village, including Wang Hongbin, head of the Nanjie village committee, have agreed to accept a monthly pay of only 250 yuan.

Almost all villagers live in apartments that have been built collectively since the ’90s. Each villager is given 100 yuan a month in free vouchers, revised upward from 80 yuan in July, to procure food and groceries at the village’s commune-style supermarket.

Chen, in his late 30s, said he was able to get himself exempted from the pay cap because he needs extra money to cover his daughter’s piano lessons. He did not reveal the amount of the exemption.

Many people in other Chinese villages have left for better lives in cities amid the push for a market economy and private entrepreneurship.

But Chen said he does not mind living and working in the commune-style Nanjie village, which values collectivism over individual wealth. “I’ve become used to the collectivism, which we’ve been taught about since we’re little,” he said.

“Life here is also less stressful as we don’t have to worry about higher living costs and housing loans.”

Below are a few photos from Chen Liang which offer a peek into the lives of Nanjie village.