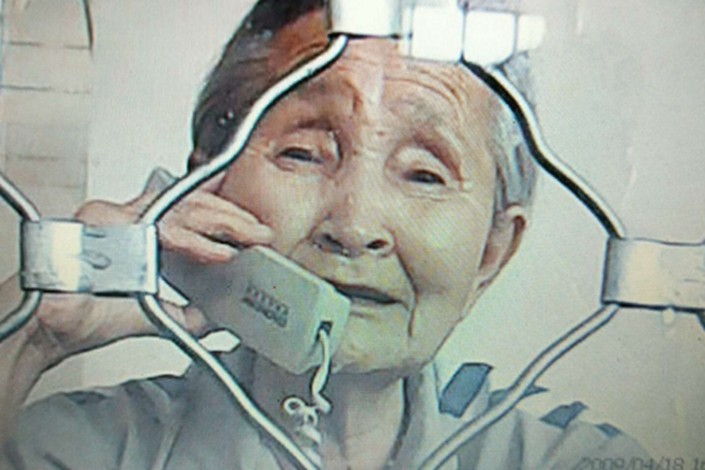 Li Shuxian speaks on the phone during a visit by her daughter Guan Guixia in June. Photo: Li’s family

The last time Guan Guixia got news of her mother was when she received a phone call last month from the women’s prison in Hebei province.

The person on the line told her to send towels, single-use gloves and a toilet chair for the 85-year-old inmate.

The mother, Li Shuxian, suffered a broken lower back recently, her second injury since being imprisoned in November 2016 for “picking a quarrel and making trouble” — a government euphemism for protesting or petitioning.

In 2013, Li began petitioning authorities because developers, hired by the local government, cut down some 200 trees belonging to her family, she claimed. The developer offered compensation, which she declined. Instead, she demanded the developers be punished.

So, Li, accompanied by her two daughters, made 15 trips to Beijing to protest the felling of the trees, according to a government document viewed by Caixin.

The trio distributed fliers in Tiananmen Square and Zhongnanhai, the compound where China’s central government operates, during multiple trips to the capital from 2014 to July 2016, according to her verdict.

Despite of her recurring health issues and advanced age, Li has been repeatedly denied parole, according to her daughter, Guan Guixia. Guan told Caixin in a recent interview that her family was specifically told not to deliver the towels and other items in person, but instead have them sent via courier.

Li’s plight, revealed in reports by media outlets including Caixin, triggered a public outcry, with many condemning the prison authority for being coldhearted.

“Who doesn’t have an elderly family member?” asked one commentator in a post under Caixin’s Chinese-language report. “An 85-year-old person should get parole even if he or she commits a real crime, much less if she only engaged in petitioning,” the commentator said.

“What harm could an 85-year-old do to the community, particularly after she broke her back?” asked another commentator.

Under China’s criminal code, those under the age of 18 or over 75 do not have to go to jail if they are sentenced to fewer than three years, have a low risk of committing a new crime, and do not pose a risk to the community.

Two of her daughters, Guan Guixia and Guan Guixiang, were each sentenced to three years and three and half years in prison, court documents show.

The Luanping county People’s Court in Chengde in Hebei province, handled Li’s case. The court did not explain why it insisted on locking her up when she was sentenced to two and a half years in prison. The provincial prison authority did not respond to Caixin’s inquiry over why she has not been allowed parole.

Under a 2005 regulation, citizens can lodge complaints with higher-level authorities if they feel due process wasn’t followed when resolving disputes with local governments or by lower courts.

However, many such petitioners have been persecuted by local authorities — in collusion with judicial departments — because each submission of a complaint to a higher-level authority leaves a sort of demerit in the files of the lower-level officials.

Guan Guixia herself was sentenced to three years in prison in June 2015 for helping her mother petition. She said when she was still in prison, she was allowed to visit her mother after Li first suffered her broken back.

He Ping, a Beijing-based lawyer for Guan Guixiang and Guan Guixia, said Li was fully qualified for parole given her health condition and age. The crime of “picking a quarrel and making trouble” does not deprive her of such legal rights either.

Guan Guiyin, a third daughter of Li who wasn’t involved in the petitioning, told Caixin that she was close to having a breakdown over her mother’s poor health and regretted not convincing her to reconsider the petitioning.

“I don’t care about the trees and our losses as long as my mom can get through this.”