By Ke Dawei and Yu Bokun 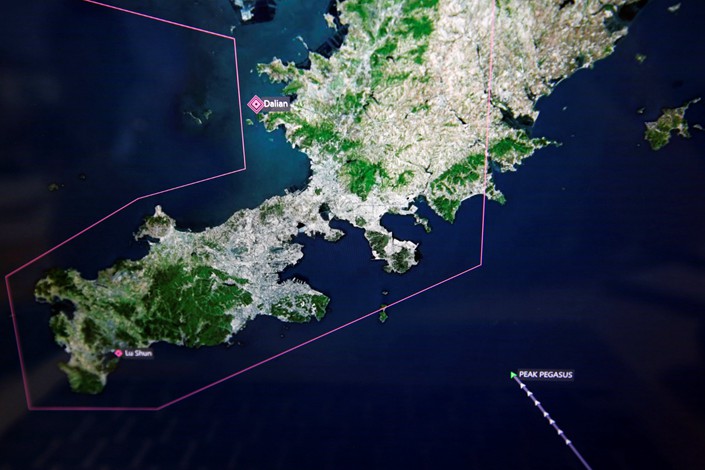 An Eikon ship-tracking system shows the position of Peak Pegasus, a soybean-carrying cargo ship, on July6 as it steamed to the Port of Dalian in Liaoning province. Photo: VCG

Reports in July of a plucky bean-filled ship called Peak Pegasus and its trans-Pacific dash to unload its cargo at the Port of Dalian before punitive tariffs came into force was almost the “feel-good” commodities story of the summer, but it was not to be.

The ship arrived hours too late, and spent the last month moored off China’s east coast.

Shipping data indicates that Peak Pegasus finally docked on Friday, very likely in preparation to unload its cargo of 700,000 metric tons (772,000 U.S. tons) of U.S. soybeans. The buyer, thought to be state-owned China Grain Reserves Corp., will pay the 25% tariff, likely adding around $6 million to the cargo’s cost, according to British newspaper The Guardian.

Another soybean-carrying vessel, Star Pioneer, started to move on Sunday to an unknown destination after being moored off the Dalian coast for several weeks, according to shipping data, while a third vessel, Cemtex Pioneer, appeared to still be anchored. Commodities experts had speculated that the vessels were waiting to see if there was any prospect of the tariffs being lifted in the near future, but appear to have given up hope.

U.S. soybeans were one of the first items to be stuck with a 25% retaliatory tariff from Beijing when the trade war finally erupted last month, when the U.S. and China hit each other with $34 billion worth of tariffs.

Yet with China the world’s biggest soybean consumer and the U.S. the biggest producer, experts predicted that China will struggle to find an adequate supply of cheaper soybeans elsewhere to meet demand, particularly with the production season in Brazil, the second-biggest producer, drawing to a close.

Soybeans are vital to China’s food chain through soy products such as tofu and soy sauce, but also in the form of pig feed. “China’s big farms are much more dependent on bulk commodity feeds than many realize,” said Even Pay, a senior agriculture analyst with Beijing-based advisory firm China Policy. “Yet Brazil can’t export enough to meet their needs, and they can’t easily make up the lost feed with scraps from elsewhere.”

While Beijing has shown no sign of relenting, it appears domestic buyers have decided to resume buying some American soybeans, even with the markup. Data from the U.S. Department of Agriculture also showed that shipments of soybeans destined for China also resumed after a three-week hiatus on July 29.

The tariffs will nevertheless continue to be damaging to U.S. firms, which will struggle to make up for reduced sales orders to China with other customers. “Our belief is that it is not possible to replace the lack of Chinese demand in soybeans with other destinations,” Soren W. Schroder, an executive with U.S. soybean giant Bunge Ltd., told investors in an earnings call at the start of the month. “Of course, there will be some switching, … but the magnitude of the Chinese demand in a normal year is simply too big to replace with other destinations,” he added.