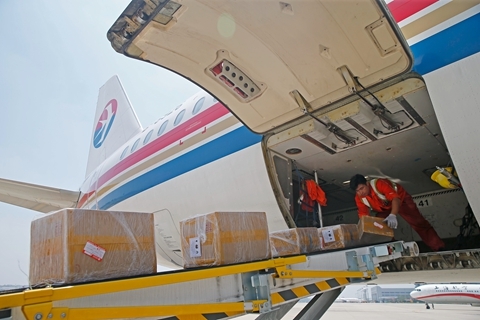 More than 22 billion packages were delivered in the first six months of 2018. Photo: VCG

China’s e-commerce and package delivery sectors face a saturated market, rising costs and a squeeze on margins, the central bank concluded in a recent policy report.

This was the first time the People’s Bank of China (PBOC) included e-commerce and package delivery sectors in its quarterly monetary policy implementation report, reflecting the increasing contribution of e-commerce to the economy.

E-commerce accounted for 17.4% of total retail sales, up from 10.6% in 2014. As of the end of 2017, China had a total of 533 million online shoppers, an increase of 14.3% from the previous year. E-commerce has directly and indirectly created employment for 42.5 million people, the central bank found.

In rural areas, e-commerce grew even faster. During the first half of 2018, rural online retail sales reached 1.2 trillion yuan, an increase of 39.1% over the same period last year, according to the report.

Driven by the booming online shopping industry, the package delivery sector is burgeoning as well. More than 22 billion packages were delivered in the first six months of 2018, an increase of 27.5% over last year. Revenue from package delivery grew by 27% to 274.5 billion yuan.

But the central bank pointed out that the growth in both online sales and delivery revenue has slowed significantly as the market approaches saturation.

Online retailers face rising costs for retaining customers and for logistics, which are squeezing margins for both retailers and delivery companies.

The PBOC encouraged financial institutions to provide innovative financial services, such as trade financing and asset-backed loans using inventory, orders and receivables as collateral to support the businesses.

The central bank also suggested improving the credit system in the online retail sector and establishing a credit tracking system.