Foreigners Get Green Light to Trade Stocks on Chinese Bourses 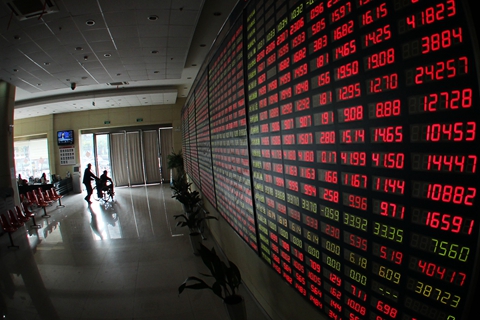 China’s A-share market has slumped amid concerns over trade tension and a weakening yuan. Photo: VCG

China’s top securities regulator said it has revised rules that will allow foreigners to trade domestic A-shares through local brokers and to participate in Chinese employers’ stock-incentive plans — the latest step to broaden access to the country’s capital market.

The new rules, which have been approved by the State Council, China’s cabinet, “will further enrich the sources of investment, expand channels for capital, and optimize the market structure,” the China Securities Regulatory Commission (CSRC) said in a statement (link in Chinese) Wednesday.

According to the revised rules published by the CSRC, foreign individuals who work in China will be allowed to open accounts at domestic brokerages to trade yuan-denominated A-shares listed in Shanghai or Shenzhen. Official data show that more than 900,000 foreigners were working on the mainland in 2016.

But not all foreign nationals in China are eligible to take advantage of the new rules. The CSRC said qualified foreign individual investors should come from countries or regions that have signed regulatory cooperative agreements with the Chinese securities regulator. The CSRC has signed such agreement with 62 countries and regions, including the U.S., the U.K., Russia, Singapore and Japan, the CSRC website shows.

Currently, foreign individual investors can trade A-shares only through brokers in Hong Kong through the Stock Connect programs, which link the Hong Kong Stock Exchange with the bourses in Shanghai and Shenzhen.

Foreign institutional investors can invest in the Chinese stock market via the Qualified Foreign Institutional Investor program under certain conditions.

The CSRC also revised rules to enable all foreign employees of China’s domestically listed companies to get involved in their respective employers’ stock-incentive plans, regardless of where the employees live, according to the new rules. Previously, the incentive program was required to limit to Chinese employees and foreign employees working within China.

The new rules will take effect on Sept. 15, the CSRC said. Regulators will soon work out detailed rules regarding tax and foreign exchange issues related to foreign investors, the commission said.

The CSRC first proposed the rule changes to the State Council in early July in the latest bid to invigorate the country’s multibillion-dollar stock market by opening it to foreign funds.

China’s domestic stock markets have had a bumpy ride this year and are on the verge of bear territory, as the trade war with the U.S. and the sliding yuan take their toll. The Shanghai composite index has lost more than 17% so far this year.

The Chinese currency, the yuan, has dipped to its lowest level against the U.S. dollar in over two years. The yuan traded at offshore market rate of 6.94 against per dollar Wednesday morning U.S. Eastern time, the first time it has fallen to rate less than 6.9 per dollar since May 2017.