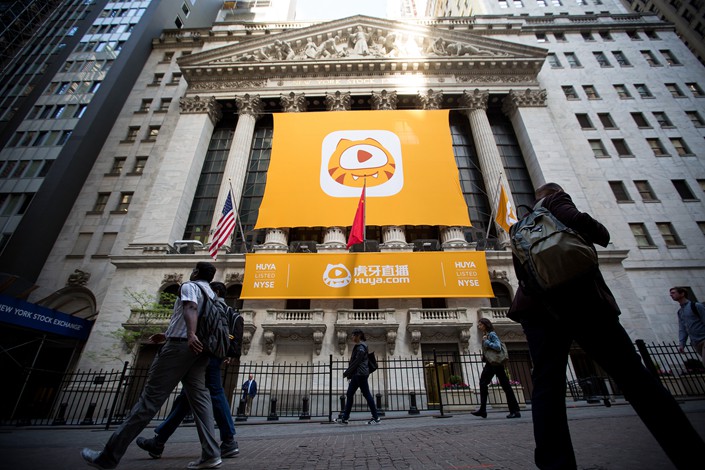 Huya Inc. banners hang from the New York Stock Exchange ahead of its listing on May 11. Photo: VCG

* Two-day sell-off of Tencent extended a longer-term slump of company’s shares, which are down about 27% since the start of the year

(Beijing) — Shares of online entertainment companies plunged during the latest trading sessions in Asia and the U.S. after signs of a dust-up between Tencent Holdings Ltd. and China’s gaming regulator that shaved nearly $40 billion from the internet giant’s market value over the last two days.

The rout for Tencent’s shares began on Tuesday, after the company revealed that it had pulled the hit game “Monster Hunter: World” from its online gaming platform just five days after releasing it in China, after receiving unspecified complaints about its content. The stock has fallen about nearly 7% over the last two trading days.

The sell-off extended a longer-term slump for Tencent shares, which are down around 27% since the start of the year, following a years-long run-up that propelled it into the world’s top 10 largest publicly traded companies in April 2017.

“With Tencent’s ‘Monster’ game getting slammed in the press, content is in focus,” said one China internet analyst, speaking on condition his name not be used because he was not authorized to comment publicly. “Given the recent and somewhat unexpected increase on content scrutiny, the market may be anticipating further tightening in video streaming.”

Investors may have also been spooked by the latest earnings report from live broadcasting specialist Huya Inc., which went public in May and whose shares have soared since then. Huya reported its revenue grew 125% to 1.04 billion yuan ($151 million) in this year’s second quarter, but forecast the growth would slow to between 104% and 109% in the current quarter, according to its latest report issued in the U.S. on Tuesday. It posted an operating loss of 17.3 million yuan in the second quarter, roughly the same as the 16.8 million yuan loss a year earlier.

Tencent’s regulatory tussle over “Monster Hunter” is part of a larger issue that has seen China suspend approval of all new online games since March. Industry players said that halt was likely at least partly the result of a massive government overhaul at that time that saw one of the main agencies overseeing the industry shut down, with plans to set up a new body to take over its regulatory functions.

Many had expected resumptions of game approvals to resume in July or August, though that hasn’t happened yet, according to a foreign manager in the China offices of a global gaming company, speaking on condition of anonymity due to the sensitivity of the situation.

“As games is not a strategic industry in the eyes of government, it is fair to say that this conflict over which institution manages and oversees (the approval process) is left unresolved instead of being ‘harmoniously’ dealt with,” he said. “Hence, paradoxically, politics are damaging profits of internet corporations (like Tencent) that are also key national champions.”

The halt in gaming approvals comes amid a broader clampdown this year on content deemed unhealthy by government regulators in a wider range of entertainment and social media sites. One of the biggest moves in that campaign saw a number of major social media platforms quickly delete material deemed to “violate core socialist values” earlier this year after receiving government pressure.