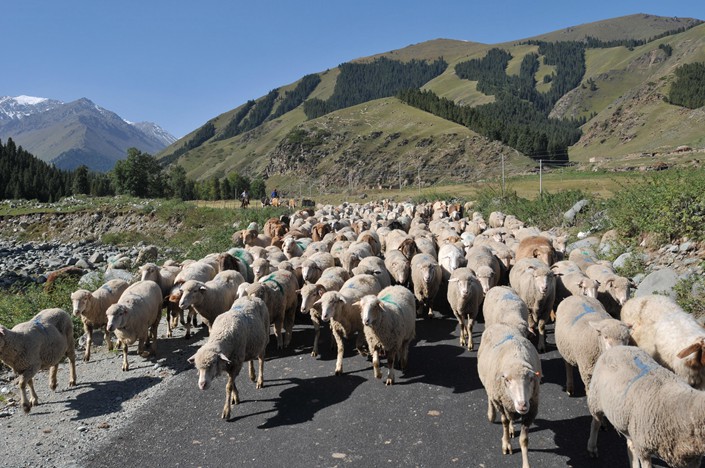 Kazak herdsmen drive their livestock down the mountain in an area administrated by the 6th division of Xinjiang Production & Construction Corps in September 2013. Photo: VCG

The brief default on a bond issued by an organization with military links in western China’s Xinjiang autonomous region has triggered a swift internal investigation into its chairman, as the government tries to boost confidence in a corporate bond market with growing default risk, Caixin has learned.

Sixth Division of State-Owned Asset Management Co. Ltd., a subsidiary of the formerly military-owned Xinjiang Production & Construction Corps, failed to pay back principal and interest for a 500 million yuan ($72.3 million) bond, it said in a Monday statement. It made up the repayment two days later but still surprised investors, many already worried about the safety of bonds issued by local government financing vehicles (LGFVs).

The default prompted internal graft busters at the Xinjiang firm to move quickly due to the “great importance” attached to the missed payments by local officials worried about the potential for more similar defaults, Caixin has learned.

A body attached to the National Supervisory Commission (NSC) anti-corruption agency sealed the defaulted company’s chairman’s office on Tuesday. The chairman, 56–year-old Wang Daojun, was also put under internal investigation, a bond investor who traveled to the region confirmed to Caixin.

The Xinjiang company dates back to military units that were sent to develop China’s Muslim region back in 1950s. Its affiliated Sixth Division runs commercial enterprises for the local government in major industries, and shares some local administrative responsibilities.

Investors consider bonds issued by entities like the Sixth Division as low-risk because such organizations usually have strong cash flow and an implicit guarantee from local governments.

Just last month, the Sixth Division received an AA rating on the bond with a stable outlook from Shanghai Brilliance Credit Rating & Investors Service Co. But that was cut to its lowest level of C after the default.

“Investors are now very worried about the situation,” the bond investor told Caixin, speaking on condition of anonymity due to the situation’s sensitivity.

On Wednesday, another division of the Xinjiang company canceled a new bond offering of 300 million yuan due to lack of buyers.