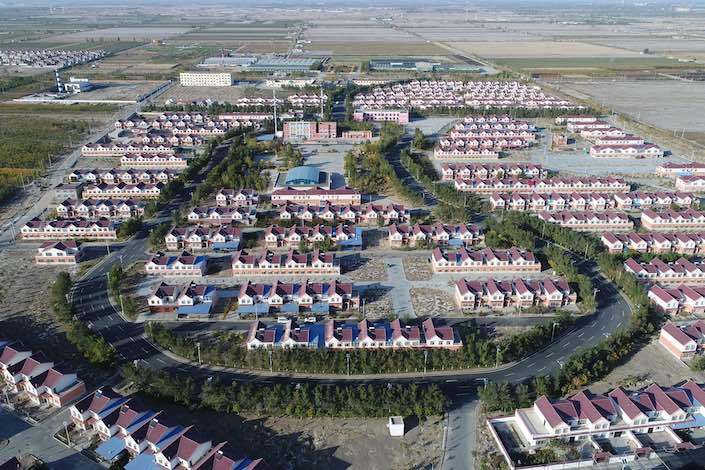 The Xinjiang Production & Construction Corps (XPCC) is a unique economic and quasi-military organization founded in the 1950s. Photo: VCG

A military-affiliated company in western China’s Xinjiang region failed to repay a 500 million yuan ($73 million) bond, marking the first default of a bond issued by a government-linked investment vehicle.

“It’s totally unexpected,” one bond trader said. “With a golden brand name, XPCC is believed to have excellent liquidity, and its bonds are highly expected to have guaranteed payment.”

A research report by Lianxun Securities Co. projected that the Xinjiang default could dampen investors’ confidence in LGFV bonds.

“We are likely to see some sell-off in LGFV bonds after the Xinjiang default,” the securities firm said. “The market will also probably reprice LGFV notes to factor in more default risks.”

XPCC is a unique economic and quasi-military organization founded in the Xinjiang Uighur Autonomous Region in the 1950s to fulfill governmental functions for regional development and administration. It runs commercial enterprises on behalf of the local government in major economic sectors, while sharing some local administrative responsibilities.

The credit rating company said in a report that the XPCC subsidiary had a relatively high status among local government owned asset management companies, with strong and stable funding support from shareholders. On Tuesday, Shanghai Brilliance downgraded its rating of the XPCC subsidiary from AA to C, the lowest rating.

The Sixth Agriculture Construction Division of XPCC controls 92.74% of the investment arm, and a special development fund of state-owned Agricultural Development Bank of China holds the remaining equity.

Market participants were caught off guard by the default because the central bank has just injected more than 500 billion yuan into the banking system through its one-year medium-term lending facility (MLF) to encourage commercial banks to purchase corporate bonds. The central bank’s incentive was expected to be beneficial for LGFV bonds.

Shanghai Brilliance said the Xinjiang company was burdened by a large amount of debt, as its asset-liability ratio increased to nearly 59% by the end of March from 54% in 2015.

As of the end of March, the company had only 87 million yuan in cash, compared with 7.12 billion yuan of debt. The company also provides debt guarantees for its parent and other affiliated enterprises.

On Tuesday, an offering of 300 million yuan of new bonds by an investment company controlled by another division of XPCC found no buyers. Wednesday is the last day of the offering. Some bond-market participants said they expected that the offering could be canceled.