China to Debt Dodgers: We’re Coming For You 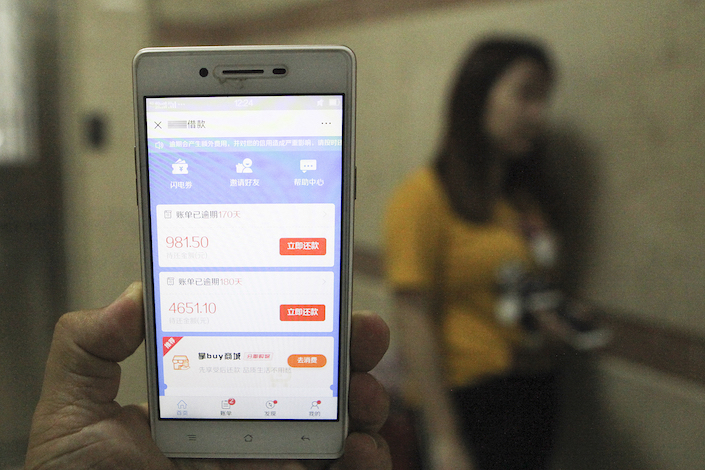 An online lending watchdog wants to identify borrowers who maliciously default on their debts in the hope the P2P lenders will soon collapse. Photo: VCG

*The problem of “vicious debt evasion” has emerged as the cost of reneging on P2P loans is low, as credit reference and regulatory tools are underdeveloped

(Beijing) — The deepening crisis in China’s online peer-to-peer (P2P) lending sector has triggered a campaign by regulators to identify borrowers who deliberately default on their debts in the hope that the platform they used will collapse.

Watchdogs want to put these malicious delinquent borrowers on databases overseen by the central bank to alert all lenders, according to a notice issued on Wednesday by the Office of the Leading Group for the Special Campaign Against Internet Financial Risks and seen by Caixin.

Local authorities, who are responsible for supervising P2P lenders registered in their respective administrative areas, were given until midday Thursday to compile and submit lists of borrowers who have defaulted on loan repayments since the beginning of July, including details such as the size of loan, whether borrowers are contactable, and whether demands for repayment have had any effect, according to the notice.

The office, housed at the central bank, will coordinate with the country’s credit reference system operators such as the People’s Bank of China’s Credit Reference Center (CRC) and Baihang Credit Scoring to include the information on the debt dodgers into their database, it added.

The action is intended to “severely crack down on vicious debt evasion,” the document said, noting that growing risks revealed in the P2P industry in recent months have led some borrowers to default in the hope of escaping their obligations when the platform they took out the loan from collapses.

Debt evasion could have grave consequences for the entire industry because a surge in bad-loan ratios risks triggering a run on the platforms by worried investors demanding their cash back, a researcher focused on the P2P sector, who declined to be named, told Caixin.

Executives at several P2P platforms interviewed by Caixin complained that the cost to borrowers of reneging on their loans is low because the development of credit reference systems and tools for regulatory surveillance have lagged behind the boom in online lending.

The CRC runs the country’s most comprehensive database, covering both corporate and individual borrowers. However, its contributors are mainly traditional financial institutions such as banks and data recorded by P2P lending platforms have so far not been included.

It was only this year that Baihang Credit Scoring, a credit reference agency dedicated to nontraditional lending, was set up. The organization, which is also backed by the central bank, will pool personal credit information from new lending channels including P2P platforms, but it has only just got up and running, signing agreements with its first group of data-sharing partners in June. Among the 15 companies, only two are P2P lending platforms, a fraction of the 1,645 such businesses still in operation.

Hundreds of online P2P lending platforms have hit financial or legal troubles over the past few months amid slowing economic growth, a cash squeeze fueled by the government’s crackdown on off-balance-sheet banking, and an impending deadline for P2P lenders to comply with regulations, which has since been extended to June 2019.

At least 165 P2P platforms either had difficulties meeting cash withdrawal demands, saw their owners abscond with investor funds or were investigated by police in July, nearly triple the number in June, according to a report by internet lending research firm Wangdaizhijia.

In one of the biggest scandals to hit the industry, Shanghai-based Zillion Holdings was found to have illegally raised over 38 billion yuan ($5.6 billion) through P2P platforms and other outlets since December 2012. The man behind the company, Wu Zaipin, has disappeared.

The wave of falling P2P platforms has caused panic among investors, with some reportedly taking to the streets to protest in Beijing's financial district on Monday where the head offices of the financial regulators are located.