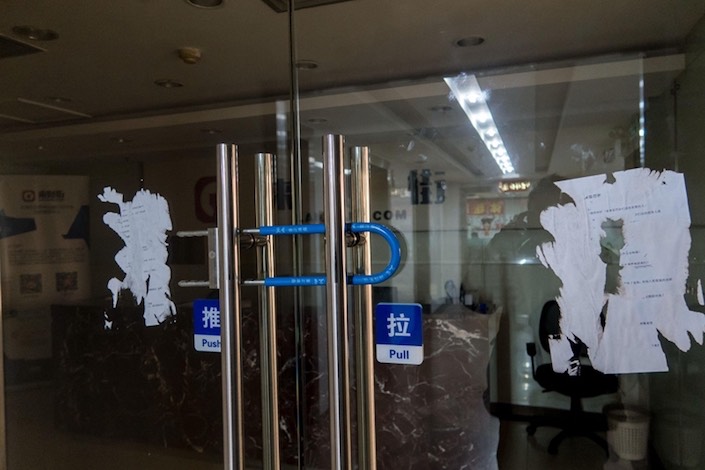 The door to the office of a P2P lending site in Shanghai is locked in February. Photo: VCG

Two years after Chinese regulators opened fire on financial fraud and violations that proliferate through the internet, the war against online financial risks is far from victory. Authorities are gearing up for a new campaign of measures intended to substantially reduce risk in the sector, Caixin learned.

Last week, the central bank extended the fight against online financial irregularities for a second time, giving authorities an additional one to two years. Initiated in April 2016, the crackdown was originally scheduled to be completed by March 2017 but was then prolonged to the end of June this year.

The explosive growth of internet-based financial services, from payments to wealth management to lending, has redrawn the country’s financial-market landscape while brewing new risks as regulators have struggled to catch up with the evolving industry. During the two-year crackdown, more than 5,000 online financial service operations have been shut down, official data showed.

As regulators worked out the next steps in the campaign including new regulations and special inspections, a new wave of financial and legal controversies have arisen in the peer-to-peer (P2P) lending industry. Several P2P platforms have recently halted operation because of tightening credit under the government’s deleveraging policy or have come under investigation for suspected fraud.

Last week, Shanghai police detained four senior executives of Tangxiaoseng, an online lending platform that was suspected of “illegally raising funds from the public,” a phrase that often refers to activities that resemble a Ponzi scheme, or a fraud in which early investors are paid quick returns using funds from later investors, fostering an illusion of success.

On July 9, Shenzhen-based Qianbaba, a well-known platform with a lending record of 30 billion yuan, defaulted on some payments and suspended business operations. On July 6, Yinpiao.com, an online wealth management platform based in Shanghai, failed to meet financial obligations, and its controller turned himself in to local police.

According to WDZJ.com, an information provider on the P2P industry, 23 P2P platforms were reported to be in financial distress or under investigation in the first 10 days of July. That follows 63 such cases in June, a higher number than in any month in the previous year.

Regulators plan to launch special inspections to correct misconduct in the P2P sector and step up punishment of violations by June 2019. Other online financial institutions, such as wealth management businesses, were required to clean up their practices by the end of June this year, Caixin learned.

Financial system officials intend to complete a thorough inspection of the industry by March and then classify market players into different categories and work out detailed rules covering all participants in the industry, a regulatory official said.

In addition to P2P, online microlenders, which issue short-term, small loans to those who are often left out of the formal lending system, will be another focus of the extended financial risk crackdown, Caixin learned. Since December, the banking regulator and central bank issued a slew of new rules to clean up a microlending sector rife with ultra-high interest rates and improper marketing and loan-collection practices.

Regulators have suspended issuing business licenses to online microlenders. They are now studying policies on market entry requirements, said a person close to the banking regulator.

Local financial authorities have been ordered to work out a clear list of risky institutions that need regulatory attention, sources said. Cities and provinces where internet financial activities are most vibrant, including Beijing, Shanghai, Shenzhen, Jiangsu and Zhejiang, will be major targets of risk monitoring.

Regulatory officials will be held accountable if they failed to fulfill their risk-control missions, sources said.

“An important part of the campaign is that an inter-agency coordination mechanism has been set up involving central and local authorities to deal with internet financial market supervision,” a regulatory official said. “It is the fundamental arrangement to support future regulation.”

For all that, the war against internet financial risks won’t be easily won as “new risks will emerge constantly in the future,” the regulatory official said. “The fundamental way to secure the healthy development of internet finance is to set up a long-term regulatory mechanism.”

P2P lending, which bypasses traditional lending by matching individual borrowers and lenders online, has flourished in China since 2011 as the government encouraged the wider use of technology to expand financial services to small borrowers. The industry peaked in late 2015 with more than 3,300 platforms in operation, according to WDZJ.com.

However, the P2P sector came into the regulatory spotlight as a focal point of China’s crackdown on internet financial risks as it amassed huge amount of funds from private investors under lax supervision but was unable to pay them back. Some platforms defaulted by misappropriating investors’ funds.

Since August 2016, financial regulators have issued a series of rules to rein in reckless growth in the sector, requiring P2P platforms to serve only as an intermediary agents and information providers without raising funds directly or guaranteeing loans.

The number of operating P2P platforms declined to 1,842 by the end of June under the tightening oversight, according to WDJZ.com. But the size of the industry keeps expanding. Outstanding loans facilitated through P2P platforms totaled 1.3 trillion yuan ($194 billion) as of June, more than doubled from 540 billion yuan two years ago.

The recent wave of P2P platform failures shed light on how some players skirted the rules. According to WDZJ.com, among the 63 platforms that halted operations in June, more than 50 didn’t put their customers’ funds into designated bank accounts as required. Half of them offered unsustainably high yields to attract lenders, and most platforms, including Tangxiaoseng, failed to disclose the actual underlying assets of borrowers.

Some platforms that said they complied with rules apparently didn’t. Hangzhou-based P2P platform Niubangold made claims of compliance by depositing funds in a custodian bank. But investors of Niubangold, which missed payments and halted operation in early July, said they found contradictions in borrowers’ information provided by the platform with business registrations, indicating the custodian bank’s failures to verify the identity of borrowers. Bank of Beijing, the custodian bank of Niubangold, declined to comment on the matter.

A P2P industry source said it is impossible for custodian banks to verify every transaction handled by P2P platforms. However, if the basic information of borrowers can’t be verified, it is possible that the custodianship was not really implemented, the source said.

Indeed, Tangxiaoseng advertised on its website that it agreed to a strategic partnership with the Bank of China, implying that the bank offered custody services for its funds. However, the bank recently told Caixin that no actual business with Tangxiaoseng was ever carried out.

“Some of the platforms are in essence Ponzi schemes, and it is time for (their bubbles) to burst after over four years in business,” said another industry source.

The challenges of effectively regulating P2P platforms stem from the large number of people involved and the flexibility of the businesses, experts said. For instance, some platforms easily skirted regulatory oversight by labeling themselves as non-P2P enterprises after reorganization.

Moving forward, regulators will put a priority on developing a long-term regulatory framework to strengthen controls on market entry and to establish detailed market rules.

“We’ve known where the lesions are and how they should be dealt with,” said one regulatory source. “The next step is to carefully carry out the surgery to prevent further risks.”