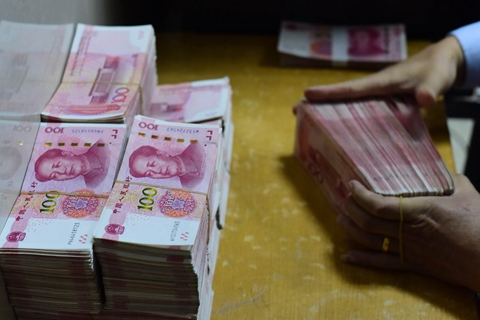 The yuan dropped Tuesday to hit its lowest in almost a year. Photo: VCG

* The meeting unveiled the leadership lineup of the new session of the commission, which is headed by Liu He, President Xi Jinping’s top economic adviser

The commission found that China’s 3-year-old campaign to cut excess financial leverage has been carried out in an orderly way, and financial irregularities have been effectively curbed.

“High-risk financial operations have shrunk and some institutions have toned down their barbaric expansionary behavior,” the commission said in a statement after the meeting.

Financial regulators face the challenge of striking a balance between the deleveraging campaign and market stability as investors experience jitters over tightening liquidity and escalating China-U.S. trade frictions.

The number of corporate bond defaults has reached a new high this year amid tighter credit and rising borrowing costs. The yuan has declined at a faster pace over the past two weeks, reflecting growing concerns over a steeper-than-expected economic slowdown and a looming trade war. The yuan dropped Tuesday through the psychologically important level of 6.7 per U.S. dollar, hitting its lowest in almost a year, while the Shanghai Composite Index hit a 28-month low on Tuesday.

Several regulatory officials told Caixin that the FSDC reaffirmed the policy of consistent deleveraging but also emphasized that policies should be carried out “in proper pace and strength.”

“Deleveraging efforts require consistency; otherwise it will create greater risks,” one official said. “But policies should be issued to pacify the market sentiment or offset impacts on the market.”

The FSDC also pledged to continue financial reforms, maintain a prudent and neutral monetary policy and keep market liquidity at abundant and reasonable levels. The commission said China’s overall financial operations remain stable, and the Chinese economy is resilient with many “favorable conditions” to fend off major external risks.

China set up the FSDC under the State Council in November to develop major financial policies and coordinate tasks concerning financial stability and reforms. The first session of the commission, which is housed in the central bank, was led by Vice Premier Ma Kai.

“The FSDC has very strong authority as it gathers the most important financial policymakers,” said a person close to the FSDC who declined to be identified.

The meeting unveiled the leadership lineup of the new session of the commission, which is headed by Liu He, President Xi Jinping’s top economic adviser, who has led China’s negotiations with the U.S. in the recent trade dispute.

Compared with the first session, the current FSDC board also includes seven members from non-financial supervisory bodies such as the Communist Party's Central Commission for Discipline Inspection, the Organization Department, the Public Security Ministry, and the Supreme Court.

The person close to the FSDC said the newly added members are part of the commission’s effort to enhance interagency cooperation to deal with financial crime and market violations.

Ma Jun, a professor at Tsinghua University and a member of the central bank’s monetary policy committee, said the FSDC will play a powerful role in coordinating different government agencies’ policymaking to maintain market stability.

Huang Yiping, a Peking University professor, said it is important for China to carefully pace new policy issuance to prevent shocks to the market.