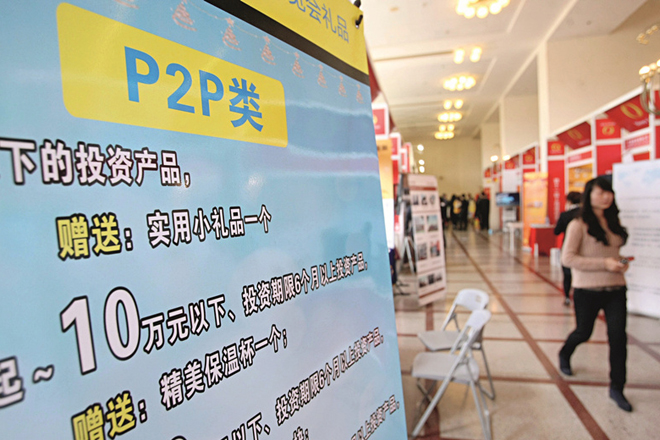 A wave of defaults emerged in the P2P industry as regulators tightened a crackdown on shadow lending. Photo: VCG

China’s banking and insurance regulator is working on establishing a mechanism to mitigate rising risks in the peer-to-peer (P2P) lending industry, calling on the country’s four state-owned asset management companies to step in.

Reuters reported a Wednesday regulatory meeting by the China Banking and Insurance Regulatory Commission (CBIRC), citing sources with knowledge of the matter. Caixin has confirmed with sources that the regulator met with senior executives of the four national asset management companies (AMCs) to discuss ways to resolve problems in the P2P industry.

The most important decision at the meeting was to create a channel for the AMCs to act as custodians for P2P assets, and the four AMCs were asked to submit proposals, sources informed about the meeting told Caixin. The CBIRC didn’t respond to Caixin’s inquiry on the matter.

There is no precedent for AMCs to deal with P2P assets. In 2004, Huarong was designated to oversee the reorganization of D’Long International Strategic Investment after one of the country’s largest private conglomerates collapsed.

Hundreds of online Chinese P2P lending platforms have gone bust amid an intensifying crackdown on “shadow banking,” part of a broader campaign to reduce risks in the financial system.

Some owners of the failed platforms ran off with billions of dollars of investors’ funds. Many investors recently hit the streets to protest in Beijing’s financial district, where the financial regulators are headquartered.

“After P2P platforms collapsed, investors couldn’t get hold of the lenders, so they go after the government and regulators, which has not only raised financial risks but also created social problems,” an AMC executive said.

The executive also said AMC should follow market rules in dealing with the P2P risks. AMCs are expected to help with the custody, liquidation and restructuring of P2P assets, but it’s unlikely they could assume all the risks, the executive said.

But the source informed about the meeting said it was expected that the AMCs’ roles wouldn’t be limited to acting as custodians and they might also directly buy out certain P2P assets.

One of the problems in the P2P industry is large-sum loans. A rule announced in 2016 limited the amount individuals and companies can borrow on P2P platforms. Companies are allowed to borrow as much as 1 million yuan ($144,500) from one platform and a maximum of 5 million yuan across several lenders.

Another source informed on the meeting told Caixin that participants discussed how to handle large-sum loans exceeding the regulatory cap.

Many P2P platforms made large-sum loans to local government financing vehicles and real estate developers. Some busted platforms were also involved with illegal fundraising and fraud. It would be difficult to recover all those funds, an industry participant told Caixin.