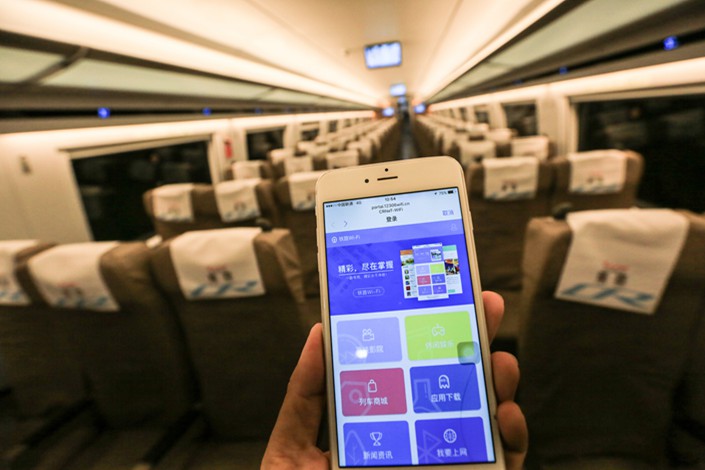 A passenger demonstrates the Wi-Fi connection on a Fuxing bullet train on Dec. 30. Photo: VCG

China Railway Corp. (CRC) has begun an open tender for the installation of Wi-Fi equipment sets on select bullet trains, the first time that the state-owned operator has opened such a bid to a third party.

The project, with undisclosed financial terms, involves 150 Wi-Fi sets to be used in the newly built Fuxing trains, according to a company statement (link in Chinese) released on Tuesday.

The statement stipulates that bidders must have relevant permits issued by the Ministry of Industry and Information Technology, which oversees China’s technology sector, the statement said.

The move comes two months after CRC sold a 49% stake in its Wi-Fi unit to two private companies — social media giant Tencent Holdings Ltd. and automaker Zhejiang Geely Holding Group Co. Ltd. — as part of an effort to introduce private money to the company to help it deal with the pile of debt it had amassed over the years building an extensive national rail network.

The bidding is expected to be very competitive as companies vie for a share in CRC’s lucrative Wi-Fi business. The operator plans to introduce wireless data connections to all high-speed trains in the coming years, said a source from a rail equipment supplier, which previously had business dealings with CRC.

CRC has previously ordered Wi-Fi equipment from one of its subsidiaries, which in turn procured from other companies and didn’t go through an open tender, another source close to CRC told Caixin.