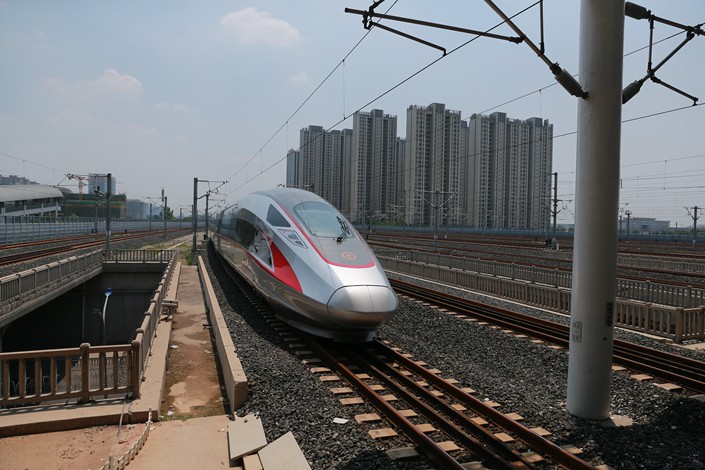 (Beijing) — The unit of the country’s railway operator responsible for the Beijing-Shanghai high-speed rail line is preparing for a listing, as the operator looks for funds to solve its debt problem, Caixin has learned.

Beijing-Shanghai High-Speed Railway Co. Ltd., in which China Railway Corp. (CRC) is the largest shareholder with a 46% stake, has started to prepare a public flotation, multiple sources familiar with the matter told Caixin. It is not yet clear where the listing might take place.

Previously, CRC was not interested in listing the unit, as the Beijing-Shanghai rail line — one of the nation’s busiest — was not short of capital, the sources said. But CRC has now decided to use the unit as a pilot project to push forward its “asset securitization” plan amid Beijing’s national deleveraging campaign to reduce corporate debt, according to the sources.

China’s railway sector has seen a massive expansion over the last decade, as the nation built the world’s largest high-speed network. As of December, China has a total of 127,000 kilometers (78,900 miles) of tracks, of which 20% are high-speed lines.

However, this investment-led development has led to the rail operator accumulating large quantities of debt. As of March, CRC reported a total of 5.04 trillion yuan ($753.4 billion) in debt — up from 4.72 trillion yuan a year before, putting its debt-ratio to hit as high as 65%.

The Beijing-Shanghai rail line, which started operations in 2011, is one of the country’s few high-speed routes that have turned a profit. As the end of 2015, Beijing-Shanghai High-Speed Railway recorded a net profit 6.5 billion yuan, with revenue of 23.4 billion yuan, according to Tianjin Railway Construction Investment Corp. Ltd., one of its shareholders.

CRC’s decision to float the unit was also due to pressure from two of its other shareholders — Ping An Asset Management Co. Ltd. and a national social security fund — which have a combined 20% stake in the company, according to the sources.

In April, CRC signed an agreement (link in Chinese) with the Shanghai Stock Exchange in which the latter said it will help CRC to carry out plans including “bond issuance and asset securitization.” That came just two months after CRC reached a similar deal with the Shenzhen stock exchange.