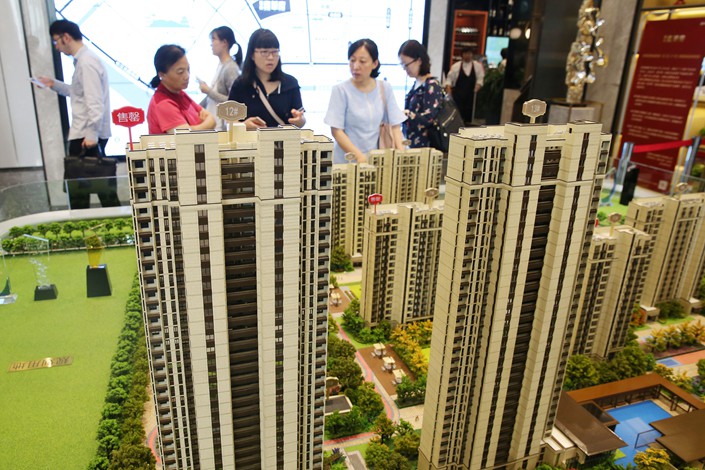 Potential buyers look at a model of an apartment block in Nantong, Jiangsu province on June 14. Photo: VCG

*The actual rise of big city rents and the rise given by the official consumer price index are out of step, with the actual July rise in Beijing rents around nine times larger than that in the index

*This has raised fears the government may underestimate inflation and make policy missteps, with some calling on the government to change how it calculates rent levels

Any underestimation of rent prices in the official consumer price index (CPI) would cause the government to underestimate inflation, at least to some degree, which in turn would raise the possibility of monetary policy missteps.

However, home rents in Beijing’s CPI survey rose 2.8% over the same period, according to data published (link in Chinese) by the Beijing Municipal Bureau of Statistics.

The year-on-year growth rates of home rents in the country’s CPI have remained basically steady, or between 2% and 3%, since June 2014, according to the National Bureau of Statistics (NBS). Analysts have described this as “miraculous” given the soaring home prices and the rapid rise of rents seen over the past few years.

The reason for the divergence in the data stems from the method government bean counters use to gauge the changes in rent prices when they calculate the CPI, analysts said.

As the primary measurement for consumer inflation, the CPI measures the prices of goods and services purchased for consumption. The NBS classifies all expenditures under one of eight groups, including housing, food and apparel. The housing group consists of four categories: housing rent, costs for owner-occupied homes, prices of construction and decoration materials, and utility prices, according to the NBS (link in Chinese).

The NBS uses an inappropriate method to gauge home rents, making the changes in rents basically equivalent to the ones in property management fees, said Guo Lei, an analyst with brokerage firm GF Securities Co. Ltd., on Twitter-like service Weibo.

Wan called on the government to adopt a new calculation method for gauging housing costs for the CPI to better reflect reality and better guide monetary policy.