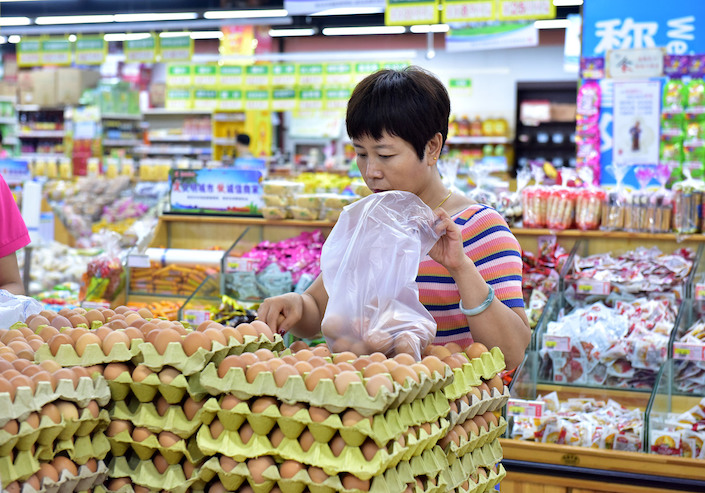 A shopper buys eggs at a supermarket in Shijiazhaung, the capital of Hebei province, on Aug. 9. Photo: VCG

*The consumer price index rose 2.1% in July, faster than June’s 1.9% and a median forecast of 2% by a Bloomberg News poll of economists

*Analysts were divided on where inflation is going in China, with some arguing a slowing economy will pose downward pressure, while others argued that tariffs on U.S. imports will drive inflation up

(Beijing) — Consumer prices in China rose at a faster pace in July due to larger increases in food and fuel prices, while factory inflation slipped, official data showed Thursday.

The consumer price index (CPI), which measures the prices of consumer goods and services, rose 2.1% year-on-year in July, faster than June’s 1.9%, according to the National Bureau of Statistics (NBS). The reading had not been this high since March. It also beat a median forecast of 2% growth by a Bloomberg News poll of economists.

On a monthly basis, the CPI rose 0.3% in July, following four consecutive monthly declines, according to the NBS. Airfares, along with tourism and hotel prices, increased in July from the previous month due to high demand during the summer holiday season, contributing 0.19 percentage points to monthly headline CPI inflation, NBS analyst Sheng Guoqing said (link in Chinese).

The producer price index (PPI), which tracks changes in the prices of goods circulated among manufacturers and mining companies, increased 4.6% year-on-year in July, slipping from a six-month high of 4.7% in June, NBS data showed. The figure exceeded the analysts’ projection of 4.5% growth. The effect of a relatively low comparison base in the same month last year contributed 3.9 percentage points to PPI inflation.

“Unlike the broad-based pick-up in PPI last year, the recent uptick has been more narrowly driven by oil prices and so has been less supportive of manufactured goods prices and corporate profits,” Evans-Pritchard said in a note.

Analysts held differing views about where inflation is going in China.

“We still think inflation on both measures is set to cool during the coming quarters as China’s economy slows and commodity prices fall,” Evans-Pritchard said.

The impact of China’s retaliatory tariffs against the U.S. should be quite small, while the ongoing economic growth slowdown should limit a further rise in inflation, Lu Ting, chief China economist with Nomura International, said in a note.

However, market research firm IHS Markit expects the CPI to experience mild upward pressure in the near term. “Food prices may rise on hot summer weather and a declining base effect of pork prices may reduce their drag on the CPI. Moreover, tariffs on U.S. food imports will add to the inflationary pressure,” it said in a note.

“The PPI is likely to remain broadly stable in the coming months. Weakening external demand due to rising China-U.S. trade hostilities will put downward pressure on the prices of industrial goods,” IHS Markit said. “However, expected stimulus from both fiscal and monetary policy will boost domestic demand and help stabilize the PPI inflation.”

Overall, China’s inflation outlook will change neither the central bank’s policy direction nor market sentiment, said David Qu, a former staffer with the central bank and now an analyst at ANZ bank.

The central bank is focusing on improving the transmission mechanism of its monetary policy to encourage the extension of credit, particularly to small businesses and specific sectors, he said.