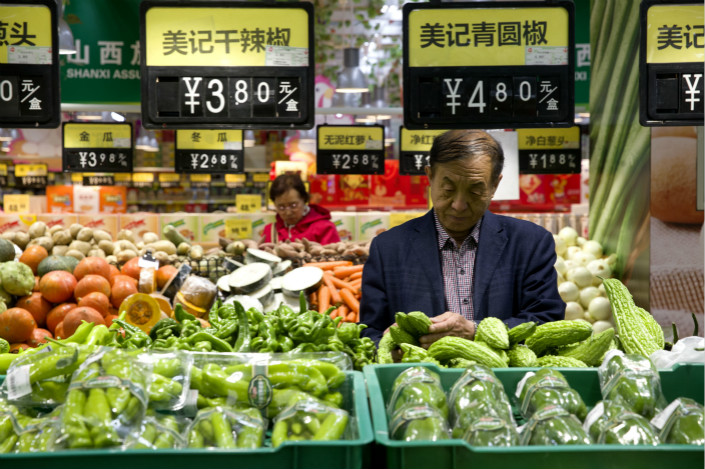 *The consumer price index rose 1.8% year-on-year last month, the lowest increase since the first month of the year

* While the consumer price index is likely to remain steady, potential restrictions on U.S. soybeans, pork may drive up food prices

The data provides more evidence that inflation pressure is easing in the world’s second-largest economy.

The consumer price index (CPI), which measures the prices of a basket of consumer goods and services, rose 1.8% year-on-year last month, the weakest pace since January, according to figures released by the National Bureau of Statistics (NBS).

The producer price index (PPI), which tracks changes in the prices of goods bought and sold by manufacturers and mining companies, increased 3.4% from a year earlier, coming off a 17-month low of 3.1% in March, NBS data showed.

However, the pickup in PPI growth was entirely due to a relatively low comparison base in the same month last year, NBS analyst Sheng Guoqing said in a separate statement. Without such a low baseline, PPI would have actually fallen 0.2% in April from a year earlier.

Industrial inflation has continued to moderate since the PPI peaked at 7.8% in February 2017 as the price-buoying effect of the country’s campaign to cut excess capacity in industries such as coal and steel has waned. The policy, which started two years ago, sent prices soaring and led the index to snap a 54-month streak of drops to return to the positive territory in September 2016.

The PPI will possibly start falling again by the end of the year, said Julian Evans-Pritchard, an economist with research firm Capital Economics.

Meanwhile, the CPI is likely to remain steady in the coming quarters, although China’s potential restrictions on imports of soybeans and pork from the U.S. amid bilateral trade tensions pose a risk that food prices might spike, he said in a note.

“Softening price pressures should give the People’s Bank ample room to loosen monetary policy later this year in response to cooling economic activity,” he added.

Last month, China’s top leaders called for boosting domestic demand to ensure the economy maintains stable growth. The call came after first-quarter gross domestic product growth decelerated on a quarterly basis for the second straight quarter. Growth came in at 6.8% year-on-year in the first three month, the same pace as in the October-through-December period.

The call has been widely regarded as a sign the government is prepared to fine-tune its policies to bolster economic growth as exports face headwinds from the trade dispute with the U.S.