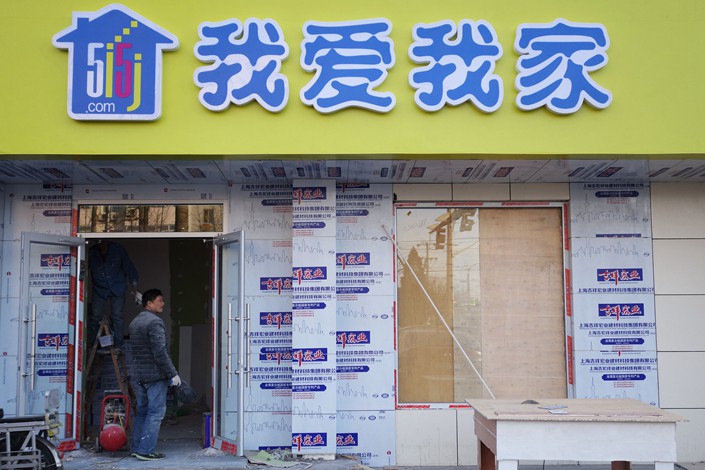 * Monthly rental prices in Beijing were 92.33 yuan per square meter in July, the highest in China

(Beijing) — During the summer, fresh graduates from around the country rush into Beijing’s job market and rents tick up. This year though, the uptick has been much larger than usual, and the letting agencies are getting the blame.

A handful of letting agencies, which dominate the city’s rental scene, have a significant impact on rent levels in Beijing. To an extent, they have a captive market, as household registration rules bar many migrants from buying property; sky-high house prices render homeownership unattainable to many of those who are allowed to buy properties; and the weakness of tenants’ legal protections leaves them unable to contest rent hikes.

On Monday, a total of 10 agencies operating in the capital promised not to engage in “malignant” competition by raising the rates they offer to landlords, a strategy they have been accused of using to snap up leases. The agencies also agreed to put an extra 120,000 apartments on the market to meet demand.

Rental sector shares enjoyed strong gains on Monday, with 14 companies related to the sector tracked by information provider Wind closing up 2.98% on average, while the benchmark Shanghai Composite Index edged up by only 1.11%.

Elaine Zhu, who together with a friend rents a two-bedroom eastern Beijing apartment for a total 6,000 yuan ($873) per month, will move to a smaller place in a few days when the contract expires as the agency, 5i5j Holding Group Co. Ltd., hiked her rent by an unaffordable 25%.

Another tenant, surnamed Ma, who rents a room in a shared apartment from Ziroom, a home rental agency under real estate firm Lianjia, will also give up his place in the face of a 25% rent increase.

It is normal for rents to go up in the summer when fresh graduates become new tenants, but this year, the uptick has been abnormally large, Huang Zhilong, head of macroeconomic research at the Suning Institute of Finance, wrote in an opinion article published by Caixin (link in Chinese).

Monthly rental prices in Beijing are already the highest in China, at 92.33 yuan per square meter in July, and the rate at which they are increasing is also faster than anywhere else, up by 21.89% from a year earlier and 2.63% from a month earlier, Huang wrote, citing information provider Creprice.cn and Centaline Property Agency.

As the top two real estate firms, 5i5j and Lianjia have recently issued reports regarding the price hike. In Lianjia’s report, the inflation is attributed to the local government shrinking supply by cracking down last winter on slums and apartments partitioned to accommodate multiple tenants.

According to Beijing government-backed media outlet The Mirror, between the start of the year and June 19, the municipal government demolished illegal buildings, both residential and commercial, that occupied 832.8 hectares (3.2 square miles), or equal to more than 1,000 soccer fields.

But several homeowners have publicly told their stories of how the agencies competed to sign up their apartments, offering higher and higher rents. According to domestic media outlet The China Times, a Beijing homeowner surnamed Chen expected to receive around 7,500 yuan a month for his apartment, but after agents from 5i5j and Lianjia affiliates repeatedly made him competing offers, he ended up receiving 10,800 yuan a month.

Outspoken 5i5j Vice President Hu Jinghui admitted on Friday that many letting agencies, including a 5i5j subsidiary and Ziroom, have offered landlords rents 20% to 40% higher than the market rate in order to win properties, and called for the government to clean up the industry.

A day later, Hu said he was resigning for “reasons that everybody knows.” The resignation became effective as of Monday, Shenzhen-listed 5i5j said in a stock filing. Over the weekend, Hu held a news conference at which he said that his words were generally factual and called for the government to publish a rental market price guide.

One of the key issues is that tenants are virtually powerless in the face of market forces. Several renters complained that their landlords hiked the rent in the middle of a contract, as they noticed that the rents had gone up for other apartments in the neighborhood.

In theory, a tenant has the right to refuse to pay rent above what is stated in the contract, or to move out and demand a penalty fee if the landlord breaches the contract by asking for higher rent, wrote Jin Shuangquan, property lawyer and vice president of the China Real Estate Marketing Association.

However, “in practice, because the landlord is in a stronger position, sometimes they don’t act according to the law but rather according to the market situation,” Jin said. “Tenants may consider that the cost of finding new accommodation may be higher, or believe that landlords will look for trouble if tenants oppose the rent hike, so people generally accept rent increases or try to bargain for a lower increase.”

Even if a court rules against the landlord in favor of the tenant, the landlord can still find ways to evict the tenant, Jin said, adding that the right to housing should be both the goal and the starting point of policies.