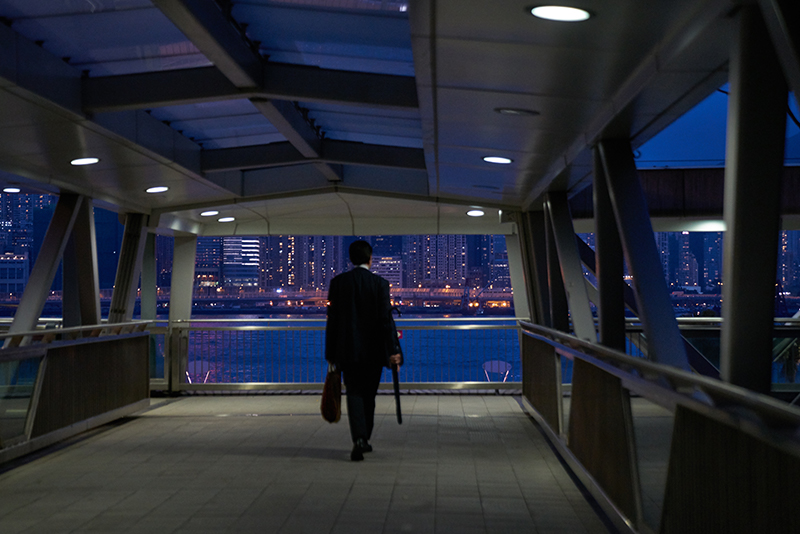 A commuter walks on an overpass in East Tsim Sha Tsui in Hong Kong on June 14, 2017. Photo: Liang Yingfei/Caixin

At a quarter past 6 every morning, Hu Yuan gets dressed and leaves home on his electric bike, heading to Shenzhen’s Bay Area, where he boards a bus that crosses the border into Hong Kong. He arrives at his office in the city’s central business district two hours later.

The 20-something Hu, an employee with the Hong Kong operation of a Chinese bank, spends another two hours each evening on the trip back to his home in Shenzhen.

The long commute between Shenzhen and Hong Kong is a hassle, but is offset by the reward of seeing his fiance every day, he said. “Nothing holds me back as long as I can see my family every day.”

Hu is among a growing number of mainlanders who have found a job in the former British colony while they maintain a home on the Chinese mainland, in the southern city of Shenzhen. In most cases, they do so in order to save money and to see their families every day.

But as Shenzhen is charging ahead in social and economic development amid greater integration between the southern province of Guangdong, Hong Kong and Macau, living costs in the city are also catching up, leaving many with a growing uncertainty about which place they should call home.

Hu went to study in Hong Kong in 2011 and found a job shortly after he graduated from college. He said that he preferred to work in Hong Kong because he grew more competitive over the years, which matters in the financial sector, he said. In addition, employees in Hong Kong are generally more professional.

The long commute, however, leaves him with little time to socialize with his friends and colleagues, most of whom live in Hong Kong.

Xin Yuan, another mainland-born worker in Hong Kong, relocated to Shenzhen in August 2016 because, as she said, she was fed up with cramped living conditions and outrageously high rents.

Xin, an editor with a Hong Kong media company, paid HK$5,000 ($637) in rent, an equivalent of about one-third of her salary, for a 5-square-meter (54 square feet) room in a Hong Kong apartment she shared with up to five other people.

Now, living in a more spacious flat in Shenzhen for roughly the same amount, Xin said she is now more content with her life in Shenzhen, not to mention the convenience associated with e-commerce and e-payment services prevalent on the mainland.

The downside is that the daily commute between the two cities costs her four hours a day, but she said she has learned to make most of it by reading a book or browsing social media sites for information valuable to her work, she said.

The number of border crossings into or out of Hong Kong grew by 2.6% in the first half of 2018 to 122 million, or 675,600 each day, statistics from the Shenzhen General Station of Exit and Entry Frontier Inspection. Over 315,000 mainlanders enter Hong Kong at least once a week, according to a survey by Hong Kong’s Planning Department between Nov. 25 and Dec. 8, 2015.

Many commuters like Hu Yuan said they are increasingly falling in love with Shenzhen due to its vitality, dynamic innovative industries and inclusiveness. However, their love affair with the city has been accompanied by a sense of unease amid soaring living costs, particularly skyrocketing housing prices in the city.

“I used to look down upon Shenzhen [as someone who has a job in Hong Kong], but now, I feel I no longer fit in with what Shenzhen has become,” Hu said.