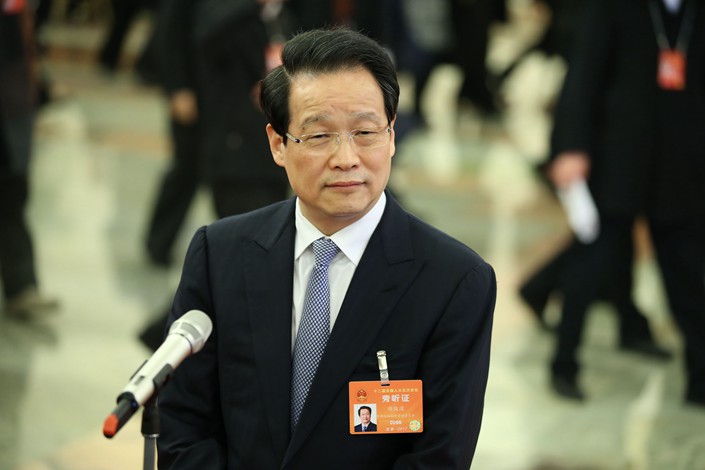 * The 6 million yuan Xiang paid to settle his divorce case was supplied by Zhang Jun, the now-detained founder of insurance upstart Funde Sino Life Co. Ltd., according to sources close to the matter

(Beijing) — A fugitive business tycoon and the boss of a property-turned-insurance company have emerged as key figures in the downfall of Xiang Junbo, the former head of China’s insurance regulator who pleaded guilty to corruption charges at his trial in June, Caixin has learned.

Although details of the allegations against Xiang and the scale of the bribes he admitted to taking have not been disclosed by the court, Caixin has learned that Guo Wengui, the billionaire businessman who fled China in 2014 as he was being investigated for graft, and Zhang Jun, the now-detained founder of insurance upstart Funde Sino Life Co. Ltd., were involved in the case.

Xiang, who was head of the China Insurance Regulatory Commission (CIRC) for almost six years until his removal in April 2017, went on trial at the Intermediate People’s Court in Changzhou, Jiangsu province, on June 14. He was accused of taking advantage of his previous positions as a central bank deputy governor, head of the Agricultural Bank of China (ABC), and chairman of the CIRC to help companies and individuals get loans and project approvals in exchange for about 19.42 million yuan ($2.82 million) in bribes.

Some details of Xiang’s dealings with Guo have already been revealed. Three senior employees of Beijing Pangu Investment Co., a property company controlled by Guo, were charged by Dalian prosecutors last year with obtaining a loan of 3.2 billion yuan from ABC in 2010 based on falsified company contracts, official seals and receipts.

The trio stood trial in June 2017 and testified they were told by Guo that Xiang, the then-chairman of ABC, supported the loan. Part of the loan, 600 million yuan, was laundered through underground banks to Hong Kong and funded Guo’s 70 million yuan purchase of a villa in Larvotto, a private estate in the territory, Caixin reported at the time.

But sources have told Caixin that details of Xiang’s case reveal that Guo bribed Xiang and middlemen a total of 13 million yuan to get the loan.

After the fraud was detected by the National Audit Office in 2012, Guo needed to repay the debt. To raise the money, he paid several million yuan to Wang Shaohua, at the time the chairman of China Credit Trust Co., to approve a 2.5 billion yuan loan secured against some of his properties. Wang was put under a graft probe in May 2017.

The second character, 55-year-old businessman Zhang Jun, was one of many to benefit from Xiang’s tenure at the CIRC, as cash-rich private companies with no insurance experience were, for the first time, allowed to get into the insurance business.

Zhang, who first made his money in real estate, bought a small Shenzhen-based life insurance company called Sino Life Insurance Co. Ltd. in 2006 and later renamed it Funde. He directly or indirectly controlled more than 90% of the insurer, well above the 51% regulatory cap for a single investor.

Funde pursued an aggressive expansion strategy through the sale of high-yield, short-term, investment-linked insurance policies, known as universal life products. By making risky bets on listed stocks, Funde’s assets surged more than fortyfold to 409 billion yuan in the decade after Zhang’s takeover, according to regulatory filings, and by 2016 it was ranked as China’s No. 3 life insurer by premium income.

Whenever Xiang visited Shenzhen, the mainland city bordering Hong Kong, Zhang was on his must-see visitor list, sources told Caixin. He was also an acquaintance of Wang Jie, a political power broker who socialized with the heads of insurance companies and their regulators. Wang was with Zhang when the latter was detained at his home in Shenzhen in February 2016, they said.

The close relationship between Zhang and Xiang manifested itself in a 6 million yuan divorce deal. After breaking up with his first wife, Yang Guang, Xiang became entangled in various romantic relationships including with a woman surnamed Sun, who became his second wife. Xiang married Sun when she became pregnant but filed for divorce after only sixth months, triggering a civil dispute between the two in a Beijing court.

The 6 million yuan Xiang paid to settle the case was supplied by Zhang, sources close to the matter told Caixin.

Xiang went on to remarry Yang, who was subsequently prosecuted in a separate bribery trial and has been named as a person of interest in her husband’s case.