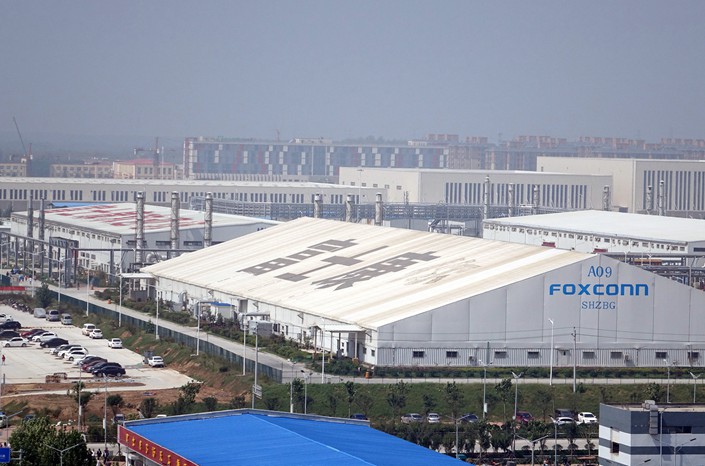 A Foxconn factory is seen in Zhengzhou, Henan province, in September 2014. Photo: VCG

Major iPhone assembler Hon Hai Precision Industry Co. Ltd. is set to list its second subsidiary on the Chinese mainland, after the float of its first unit garnered overwhelming traction from investors in June.

Avary Holding (Shenzhen) Co. Ltd., a maker of printed circuit board (PCBs) under Taiwan’s Hon Hai, better known by its trade name, Foxconn, was issued a formal approval notice by the China Securities Regulatory Commission on Friday to float shares on the Shenzhen Stock Exchange. It received an initial approval on July 10.

Foxconn Industrial Internet Co. Ltd., which makes cloud service equipment and industrial robots, saw its traded shares in June on the Shanghai bourse surge by 44%, the debut limit, on the first day.

Foxconn Industrial got the Chinese regulatory approval just three months after applying, one of the shortest waiting periods ever in a country where initial public offerings (IPOs) can sometimes take years to go to market due to a backlog of applicants and a strict screening process.

Avary Holding — which produces high-density interconnection boards and PCBs used in devices such as smartphones — counts Apple Inc. as its largest customer. Avary reported a net profit of 1.9 billion yuan ($279 million) last year on sales of 23.9 billion yuan, according to its draft prospectus.

It applied in November to list, and was initially viewed as the first Foxconn subsidiary to likely list on the Chinese mainland, ahead of Foxconn Industrial. Avary has yet to disclose its listing date and IPO price ranges.

Parent Foxconn is the world’s top contract electronics-maker and assembles the bulk of Apple products, including iPhones. The conglomerate has diversified into new areas such as display screens, autonomous driving and cancer research. It took control of Japan’s Sharp Corp. in 2016 for $3.5 billion.

Foxconn has listed over 20 subsidiaries in Taiwan, five in Hong Kong, one on the Chinese mainland and another in Japan.