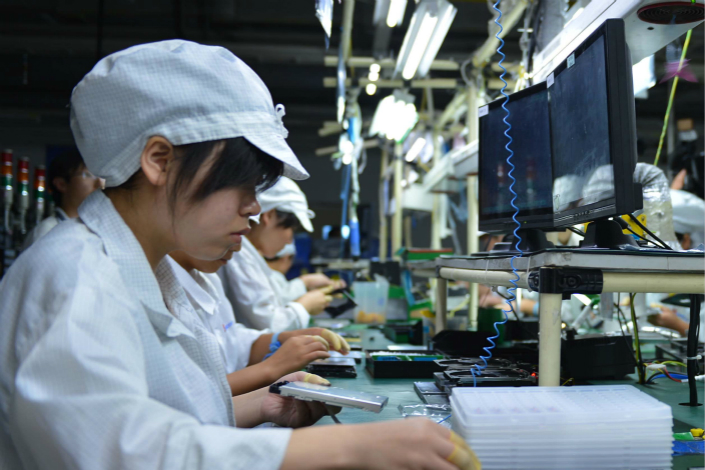 A unit of the Taiwan manufacturing giant that makes iPhones for Apple Inc. plans to start marketing its 27.1 billion yuan ($4.25 billion) IPO on Thursday, in an initial public offering that will be one of China’s quickest-ever to market under a Beijing campaign to promote high-quality companies.

Foxconn Industrial Internet Co. Ltd., a maker of cloud service equipment and industrial robots, detailed its fundraising plans as it gets set to start selling its shares at a price of 13.77 yuan, according to a filing (link in Chinese) to the Shanghai Stock Exchange late on Tuesday.

The announcement of the plan to sell about 1.97 billion shares comes just three months after parent Hon Hai Precision Industry Co. Ltd. first applied to list the unit. That represents one of the shortest waiting periods ever in a country where IPOs can sometimes take years to make it to market due to a big backlog of applicants and a strict screening process by the regulator.

Such long waits have led many of China’s best-known companies to list overseas where the process is much quicker, making shares of high-tech giants like Alibaba Group Holding Ltd. and Tencent Holdings Ltd. largely unavailable to local investors. In a bid to change that, Beijing this year has launched a policy that lets high-quality growth companies skip to the head of the line. It is also crafting a program that will let overseas-listed names like Alibaba make second listings at home using Chinese depositary receipts (CDRs).

If it sells all of its shares at the set price, Foxconn Industrial’s IPO would be the biggest on one of China’s two major domestic boards since the 2015 listing of Guotai Junan Securities, which raised $4.8 billion, according to media reports.

Foxconn Industrial, which was set up three years ago in Shenzhen as a strategic investment platform uninvolved in actual business operations, reported that its revenue jumped 30% to 355 billion yuan in 2017. Its profit grew at a slower 10% to 15.9 billion yuan over that period, according to its latest filing.

That filing said the company expects to post revenue of between 146 billion yuan and 155 billion yuan in the first six months of this year, representing 6.8% to 13.1% growth from a year earlier. It said its profit for the period will total 5.4 billion yuan to 5.6 billion yuan, up 0.9% to 5.1% from a year before.

Foxconn’s listing will become the second such fast-tracked major offering under Beijing’s campaign to give preferential treatment to such companies. Earlier this month, drugmaker WuXi AppTec Co. Ltd. made its trading debut in Shanghai, just two months after the securities regulator gave it speedy approval for the listing. Since that listing, the company’s stock has surged by the daily limit each trading day and now trades at 88.73 yuan, more than four times its IPO price of 21.60 yuan.