Down But Not Out: ZTE Sees Light at End of the Tunnel 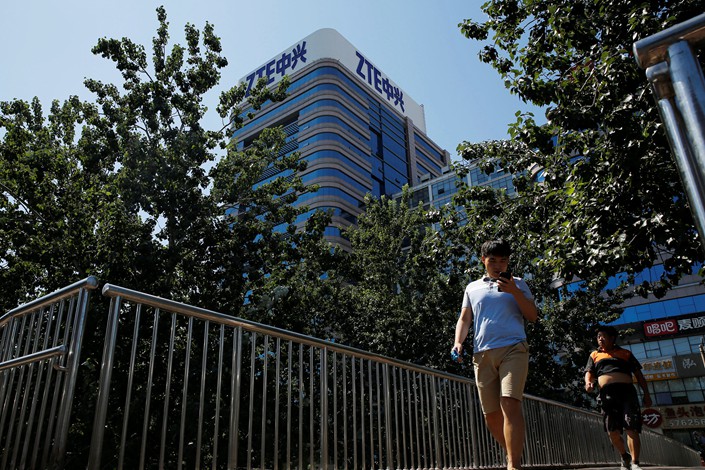 People walk past a ZTE Corp. building in Beijing on Aug. 29. Photo: VCG

Embattled telecom-equipment maker ZTE Corp. said it will return to profitability in the third quarter, as it rebounds from a devastating conflict with Washington that resulted in a massive loss for the three months through June.

ZTE has been under the gun since April, after the U.S. Commerce Department determined the company violated a previous agreement punishing it for selling American-made products to Iran in violation of U.S. sanctions. Washington initially cut off ZTE from all of its U.S. suppliers, a move the company called a threat to its existence, but in July the authorities relented and reached a new deal fining the company $1 billion and forcing it to completely overhaul its management.

The company’s halt in production for much of the second quarter, which runs from April to June, showed up throughout its latest financial results released late on Thursday. Revenue for the quarter tumbled 58% to 11.9 billion yuan ($1.74 billion), or less than half the revenue from the previous quarter, according to calculations by Caixin based on the company’s half-year results. The company posted a 2.4 billion yuan loss for the period, compared with a $1.1 billion profit a year earlier.

The upbeat forecast helped to lift ZTE shares, which closed up nearly 1% in Friday trade in both Hong Kong and on the Chinese mainland in Shenzhen. But the Hong Kong stock is still down about 40% from levels where it traded before the crisis began.

ZTE’s woes date back several years to when the U.S. first launched a probe into the company’s suspected sales of American-made products to Iran. But the case’s climax earlier this year has cast a spotlight on recent trade frictions between Washington and Beijing, sparked by the former’s accusations of unfair trade practices such as intellectual property theft and forced technology transfers.

The case also spotlighted the high degree of dependence on imported technology still experienced by many of China’s recently minted high-tech giants, and has led to calls in China for the country to more actively develop its own industries in core areas like software and microchips.