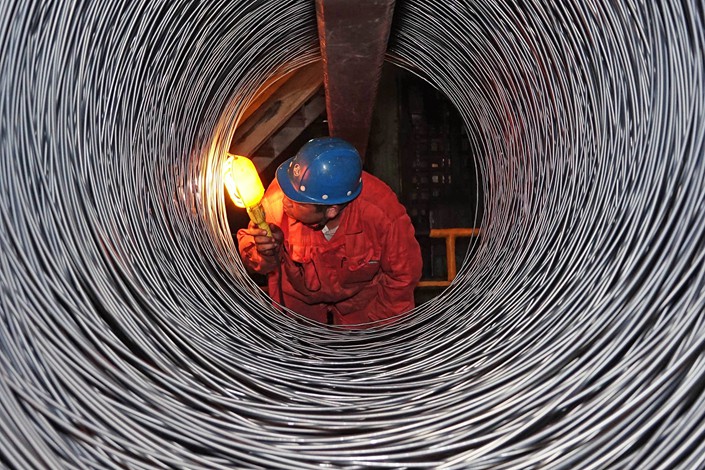 The manufacturing purchasing managers’ index (PMI) for August inched up to 51.3, off a five-month low of 51.2 in July, according to the National Bureau of Statistics (NBS). This month’s reading beat a median forecast of 51 by a Bloomberg News poll of economists.

A number above 50 indicates an expansion in manufacturing activity, while anything below indicates a contraction.

The subindexes for input prices and output charges across the manufacturing sector both rose in August, remaining in expansionary territory, NBS data showed. However, the subindex for new export orders dipped to a six-month low, falling further into contraction.

China’s ongoing environmental inspections across the country, part of the government’s campaign against pollution, have pushed up raw material prices, analysts with investment bank China International Capital Corp. Ltd. said in a note. The inspections have helped drive more profit to upstream manufacturers instead of downstream ones, they said.

The nonmanufacturing PMI, which includes the construction sector, came in at 54.2 in August, off an 11-month low of 54 in July, NBS data showed.

The better-than-expected official PMI readings suggest that output growth may have edged up in August, but the breakdown of the surveys points to a further weakening in demand, implying that economic activity will come under renewed pressure in the coming months, said Julian Evans-Pritchard, an economist with research firm Capital Economics, in a note.

In the first half of 2018, manufacturing contributed 30% of China’s gross domestic product (GDP), while construction accounted for 6%, according to Caixin’s calculations based on government data. The services sector was responsible for the lion’s share of the country’s economic activity, accounting for 54% of its GDP over the period.

The independently compiled Caixin China manufacturing PMI is scheduled to be published on Monday.